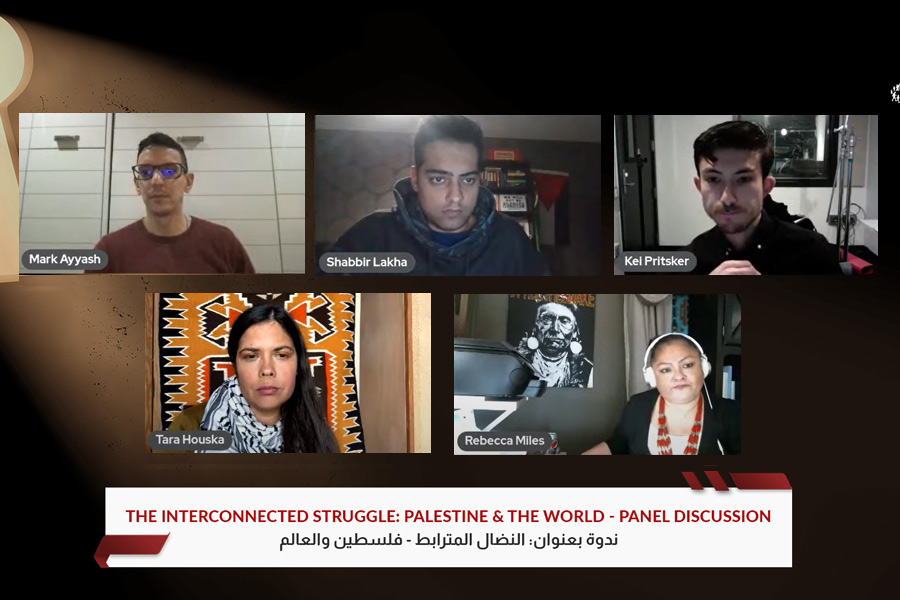 The second webinar of ‘Return Week II’, held on December 07 and entitled ‘the Interconnected Struggle: Palestine & the World’, has brought to the forefront the similarities of the Palestinian national liberation struggle and indigenous peoples’ struggle for the land.

The webinar was chaired by Shabbir Lakkha, officer at Stop the War Coalition and campaigner at the People’s Assembly. Shabbir provided an overview of ‘My Return Campaign’, saying it is an international campaign launched by PRC in partnership with Palestinian and international human rights partners and NGOs in order to amass the largest possible number of signatures showing Palestinians’ unyielding commitment to their right of return to their homeland—a right guaranteed by International Law and relevant UN resolutions.

Shabbir said the campaign comes at a time when efforts have been intensified by Israel and its allies, most notably the US, to negate Palestinians’ refugee status and, as a result, rescind their right of return to their homeland and delegitimize any institution providing assistance to the refugees, such as UNRWA.

Rebecca said the struggle of Palestinians is just like other native peoples’ struggle for the land and attempt retrieve property.

She pledged that she will continue to support the efforts of the Palestinians to retrieve their land and speak up for Palestinians’ right of return to their homes.

The second speaker, Keir Pritsker, stressed that it is important “to continue to raise the issue of Palestine when even it’s not in the headlines”. Keir said with every day that passes by, a child, man and/or woman is being killed, imprisoned, terrorized, and/or detained in order to allow colonizers to live a high standard of living and oppress the native people of the land—the Palestinians.

Keir said the so-called state of Israel resorts to military occupation, walls, checkpoints and bombing of Gaza, which is a reminder of how the US invades countries through military force. He said nti-imperialist activists around the world should oppose US imperialism and stand by every country the US unilaterally decides to invade. He slammed the pro-Israel biased stance of the Joe Biden administration.

According to Keir, Palestine represents “every single person who would rather die on their feet than live under their knees.”

Tara Houshka, who was wearing koufiya, said it was deeply moving to reach out to Palestinians and share their aspirations, which give a sense of interconnectedness of the struggle of native peoples for land and resources and their attempts to protect their homes.

Tara said it is primordial for activists around the world to push back against genocides, land-theft, creation of checkpoints, control of borders, desecration of holy places, terrorizing children, killing of people, and bombing entrapped cities. “This is just inhumane, unjust”.

The final speaker was, Professor Mark Ayyash, who is the author of A Hermeneutics of Violence (UTP, 2019). He was born and raised in Silwan, Jerusalem, before immigrating to Canada, where he is now an Associate Professor of Sociology at Mount Royal University.

He underscored Israel’s expulsion of the Palestinians and the critical nature of discussions about the land in the Palestinian struggle and struggles of indigenous people around the world,

Ayyash said the indigenous peoples’ relation to the land tends to be more communal collectively-based and doesn’t follow modern notions of state sovereignty and bureaucratic structures. It is rather linked to the notion of land as a way of life.

In Ayyash’s view, Israeli wars of conquest on indigenous Palestinians highlight the depth of the loss inflicted on the Palestinians who lost a way of life, they lost life itself.

He stressed the importance of solidarity bonds between indigenous peoples, saying  one reason why it is easy for Israel to censor and silence speech in US and Canada, among other countries involved in agendas seeking to exterminate indigenous peoples, is because for such countries people like the Palestinians signify an anti-imperial, anti-revolutionary force that threatens their interests.  “They just don’t want to see Palestinian liberation”.

'Return Week', in its second edition this year, is held annually by the PRC to raise awareness amongst the international community about the inalienable right of Palestinian refugees to return to their homeland. Every year, a plethora of activists, academics, and political commentators take part in webinars/seminars organised by PRC as part of the 'Return Week' in an attempt to underscore the Palestinian refugee plight and discuss pro-Palestine outreach policy and advocacy mechanisms seeking to enable Palestinian refugees to exercise their right of return through international laws and conventions.