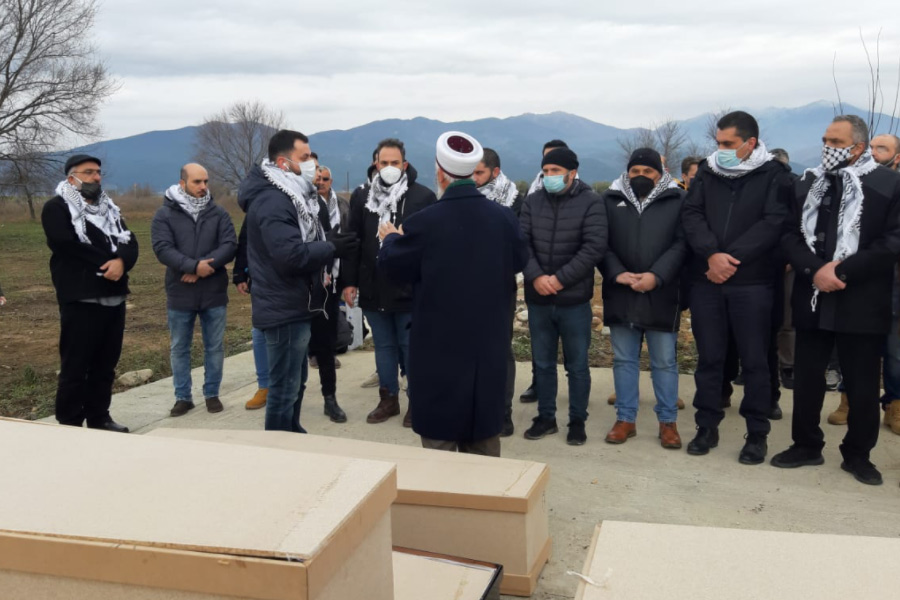 The Palestinian Return Centre (PRC) in London participated in the funeral procession of the victims of the tragic boat accident which occurred off a Greek coast on December 24, 2021, and claimed the lives of 17 migrants, including eight Palestinian refugees from Syria.

PRC’s Director-General, Tareq Hammoud, marched in the funeral parade held in Komotini city, in the region of East Macedonia and Thrace, northeastern Greece.

Following the accident, PRC received deeply alarming reports about what the Greek Coast Guard described in a statement as a “gigantic” operation that began on Friday, December 24, after a boat foundered off the island of Folegandros.

The list of victims includes Rawnd Alayde,  a Palestinian-Syrian refugee born on November 21, 1998, and who risked her life onboard the Greek-bound “death boat” whishing to reunite with her family whom she has not seen for over six years after the German authorities turned their back on her appeals for a family reunion, forcing her to seek alternative routes.

In a statement issued earlier this month, PRC said the tragedy is the result of the denial of the right to family reunification by Germany and other EU states which continue to overlook the fact that protection of the family unit is a fundamental human right. Separation of families are of particular concern when they lead to migrant boys and girls being separated from their legal guardians or left unaccompanied. The longer-term separation of families due to migration, in particular when girls, like Rawnd, grow up in a host country without one or both parents, can also have a range of psychological, social, and other adverse repercussions.

PRC called on the EU and European Parliament to immediately embark on a fact-finding probe to determine the root causes of the Greece boat tragedy and hold those responsible for the migrant deaths to account in order to save more lives and help bring such crimes against humanity to a halt.

PRC further urged the EU to reconsider its migration policy and family reunion red tape at embassies, migration departments, and consulates in host countries and to work on protecting the lives of migrants, among them hundreds of children, who are the victims of displacement, poverty, and economic marginalization.