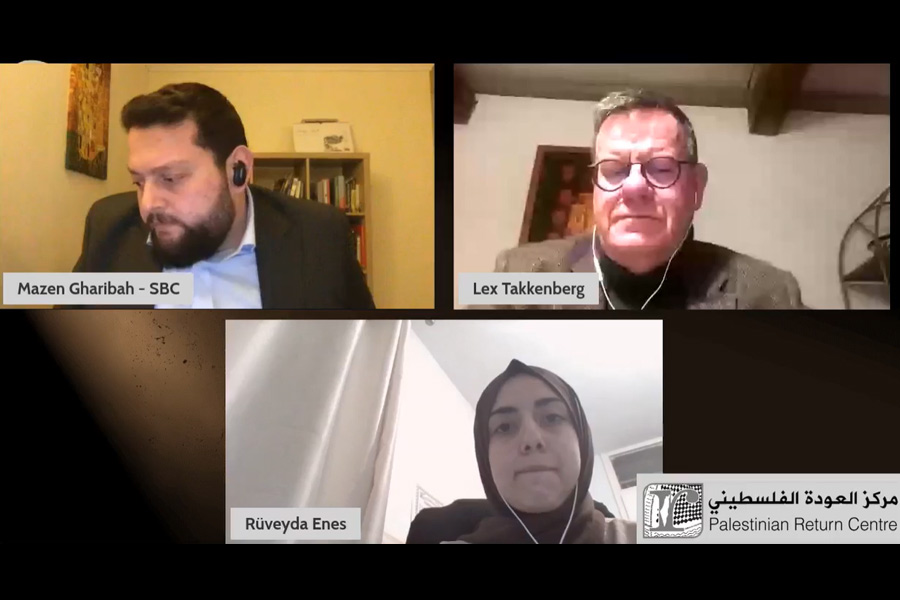 The Palestinian Return Centre (PRC) in London held a webinar entitled  '73 Years of Palestinian Refugeedom: From Refugee Camps to Shipwrecks' to discuss the ongoing struggle of Palestinian refugees from their 73 years of dispossession and displacement to the journeys they are forced to undertake across the Mediterranean.

The event chaired was by Ruveyda Enes, intern at the Palestinian Return Centre.

Ruveyda opened the panel discussion by introducing “My Return” initiative, which is an international campaign launched by the Palestinian Return Centre (PRC) in partnership with Palestinian and international human rights partners and NGOs in order to amass the largest possible number of signatures showing Palestinians’ unyielding commitment to their right of return to their homeland—a right guaranteed by International Law and relevant UN resolutions.

Ruveyda said the campaign came at a time when efforts have been intensified by Israel and its allies, most notably the US, to negate Palestinians’ refugee status and, as a result, rescind their right of return to their homeland and delegitimize any institution providing assistance to the refugees, such as UNRWA.

PRC’s speaker defined the right of return as the right of Palestinian refugees to return to their homeland from which they have been expelled since 1948. It implies both first-generation refugees and their descendants, regardless of their place of birth or residence and their political, social, and economic condition.

The first speaker was the father of Rawnd Alayedi, who died on a migrant boat as she attempted to reunite with her family in Germany.

The father said he came to Germany in late 2015 in search for a dignified life and to reunite with his family who were in Jordan.

“My family fled Syria to Jordan following the outbreak of the conflict in Syria”, said the father. “At the time, my daughter was aged 16. I submitted an application for family reunification but was shocked when I was told that German authorities suspended the right to family reunion for holders of one-year visas.”

Sometime later, a staffer at the German embassy in Amman told her: “Your family reunion demand was rejected because you reached the age of legal maturity”.

“Because of that, my daughter lived in distress as she was far away from her father, mother, and daughters”, added the father. “I did not see her for ten years.”

On December 24, 2021, at 07:00 p.m. the family received the socking news that a boat boarded by Rawnd capsized. The father headed for Greece where he identified his daughter’s body at the hospital.

“After ten years, I met my daughter in her coffin. I saw my daughter, kissed her, and bid her last farewell. All praise be to Allah”, said the father.

He urged the German authorities to reconsider its migration policy: “It’s unfair that a child who has just reached 18 be deprived of reuniting with his/her family. This is just unfair! This is inhumane! Such laws should be revised.”

“This is not only my story. My story has already happened to scores of other refugees who have separated from their sons and daughters in Jordan, Lebanon, Syria and other destinations and they cannot reunite with them only because they reached the age of legal maturity”, said the father.

“Germany should revise its family reunion policy. We, Arabs and Muslims are human beings. Nobody can live in peace while their children are away from them. May my daughter and the other victims rest in peace”, he concluded.

The next speaker was Mazen Gharibah, a Syrian researcher and political activist. He works as a senior researcher in the Conflict Research Programme (CRP) - Syria Team at the London School of Economics (LSE), where he focuses on the issue of local governance and civil society. He is also the Executive Manager of the Syrian British Council (SBC), a UK-based Syrian advocacy body that reflects the voices of the Syrian diaspora.

Mazen opened his speech by introducing himself as a Syrian refugee in the UK. He shed light on the many obstacles Syrian and Palestinian refugees are facing on a daily basis.

Mazen said he believes the outbreak of the Syrian revolution in 2011 clearly shows the level of solidarity between Syrians and Palestinians. Palestinians and Syrians took down to the streets and marched together to demand freedom and democracy and human rights for all.

According to Mazen, Palestinian refugees, like Syrian, were subjected to detention, torture, and even murder by the Syrian regime. He referred to Palestinian refugee Rami Suleiman, who has been forcibly-disappeared by the Syrian regime for the tenth year running. Rami was kidnapped by the regime troops on July 7, 2013, at a checkpoint set up near Yabrod city, in Rif Dimashq. He had been diagnosed with kidney disorders.

In Mazen’s view, the hardships of Palestinian refugees in Syria amount to a “new Nakbah” (catastrophe) as around 300,000 of Syria’s Palestinian population have been displaced in or outside the country. Over 70,000 Palestinians fled Syria to neighboring countries like Lebanon, Jordan, and Iraq, where they face arbitrary detention and forced deportation and are denied access to vital services and the labour market.

“We need more international funding to UNRWA to be increasingly able to handle the Palestinian refugee cause and we need governments to take responsibility for these refugees”, said Mazen as he stressed the refugees’ need for constitutional and legal reforms, reconstruction, property rights, and safe returns to their countries.

The last speaker was Dr. Lex Takkenberg – a Dutch National, and a Senior Advisor on the Question of Palestine at ARDD. he is non-resident Professor of Humanitarian Affairs at Fordham University. From 1989 until 2019, he worked in various field and headquarters positions with UNRWA, the UN agency for Palestinian refugees, most recently at its Amman headquarters where he was the agency’s first Chief Ethics Officer. He was previously UNRWA’s General Counsel, Director of Operations, and (Deputy) Field Director in Gaza and Syria. Before joining UNRWA, he was the Legal Officer of the Dutch Refugee Council, from 1983 until 1989. A law graduate from the University of Amsterdam, where he also worked as an Academic Assistant from 1987-1989, he obtained a Doctorate in International Law from the University of Nijmegen, the Netherlands, in 1997 after having successfully defended his doctoral dissertation entitled The Status of Palestinian Refugees in International Law. Oxford University Press (OUP) published a commercial edition of the dissertation in 1998; an integral Arabic translation was published by the Institute for Palestine Studies in 2003. A new version of the book – co-authored with Francesca Albanese – was published, also with OUP, in 2020.

Speaking from rural France, Dr. Lex, said in considering the situation of Palestinian refugees we should always remember that the issue is not merely the outcome of the 1948 and 1967 wars but rather the result of Zionism, of the deliberate and ongoing settler colonial endeavour to create a state with little of non-Jews as possible.

He referred to a recent Amnesty International report on Apartheid in relation to Israel which highlighted the attempt to disconnect the events of 1948, the Nakbah, from Palestinian existence in 2022.

“Such an attempt is artificial and cynical. From 1948 onwards, from Deir Yassin to Sheikh jarrah, the ongoing nakbha has been deliberate and continuous”, said Dr. Lex, referring to ongoing efforts by Israel to erase the Palestinian people from their homes and land.

He added that the Palestinian refugee issue is “not just a matter of humanitarian needs”; The ongoing Nakbha is part of a deliberate settler colonial endeavour and land grab policy.

The academic also said that under international law Palestinian refugees, including their descendents, irrespective of whether it is second or third or fourth generation, have the right to return to their homes, reclaim their lands, and receive compensation for demolitions and land grab.

He said these rights are acknowledged in UN General Assembly Resolution 194. “These rights originate from the illegality of ethnic cleansing in Palestine, in other words from the war crimes committed with the establishment of the state of Israel and the consequent displacement of some 760,000 Palestinians from their lands and homes”.

“Even if Resolution 194 had never been adopted, this right of return would exist as strong as it is today because it flows directly from general international human rights and humanitarian law”, he added.

Dr. Lex said Palestinians should be entitled to have access to legal protection, as per international law and UN resolutions.