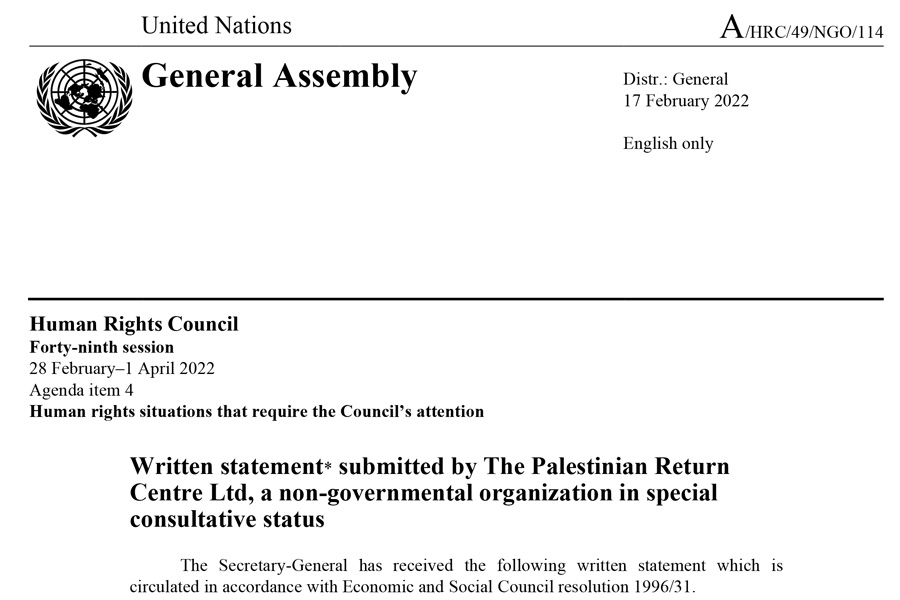 The Palestinian Return Centre (PRC) in London submitted a report to the UN Human Rights Council (UNHRC) about the humanitarian impact of the latest decision by the UN Relief and Works Agency for Palestine Refugees in the Near East (UNRWA) to cut aid for Palestinian Refugees from Syria (PRS) in Lebanon.

The report was added to the official archives of the UNHRC under code reference A/HRC/49/NGO/114.

The report underscored the abject humanitarian condition endured by the Palestinian refugee community fleeing war-torn Syria to Lebanon and the tragic consequences of UNRWA’s announcement to reduce multi-purpose monthly cash grants of 100 USD to every registered PRS to 25 USD, resulting in further despair for PRS.

“The funding crisis has forced UNRWA to go for drastic austerity and cost-control measures to keep services afloat. This has triggered a mood of distress, boiling despair and hopelessness among the Palestinian refugee community’’, said the document.

Quoting the Agency’s chief in his remarks at the Geneva Executive Briefing in mid-January, PRC said: “Austerity and cost-control measures have reached their limit. Austerity reaches its limit when we put 50 children in a classroom or leave the most deprived children without transportation or stationery. These children will most likely drop out of school. Austerity reaches its limit when a doctor can only spend three minutes with a patient. And austerity reaches its limits when -month after month- the Agency does not know if it will be able to pay the salaries of more than 28,000 staff and, as a direct consequence, critical services to millions of refugees across the region”.

PRC warned that while the current crisis affects everyone in Lebanon, Palestine refugees from the Syrian Arab Republic are enduring particular hardship given their already marginalized status in the country. They are struggling to survive and their needs have increased dramatically, with poverty rates reaching 87 per cent among the PRS.

The situation has been exacerbated by the unprecedented economic and financial crisis currently faced by Lebanon, in what the World Bank characterized as a “deliberate depression” and one of the most severe crises since the mid-nineteenth century.  The majority of PRS have had their purchasing power decline at least threefold, added the statement.

It further stated that Palestinians in Lebanon do not enjoy several important rights; for example, they cannot work in many professions and cannot own property (real estate). Because they are not formally citizens of another state, the State of Palestine refugees are unable to claim the same rights as other foreigners living and working in Lebanon.

PRC called on the UNHRC to urge UNRWA to backtrack on the new decision and find alternative channels, rather than austerity, to refresh its annual budget and increase its financial grants for PRS in Lebanon, in light of the dire socio-economic conditions inflicted by the crash of the Lebanese pound and the dramatic price leap.

PRC stressed that UNRWA should seek more donors for its annual budget in order to keep up its vital services for vulnerable Palestinian refugees. The UNHRC should also remind UNRWA of its humanitarian mission as mandated by the UN to assist Palestinian refugees in its five fields of operation, including Lebanon.

PRC added that UNRWA should be called upon to work on the refugees’ unconditional return to their homes from which they have been displaced by the Israeli occupation since 1948.