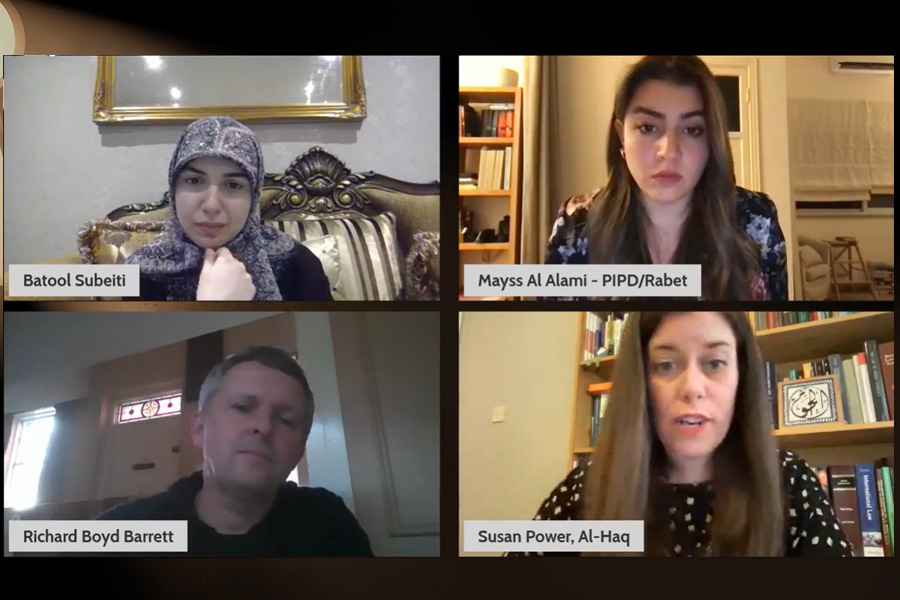 The Palestinian Return Centre (PRC) in London hosted on Monday evening a webinar entitled “Israeli Apartheid: A Crime against Humanity”.

Chairwoman Batool Subeiti opened the panel discussion by introducing “My Return” initiative, which is an international campaign launched by PRC partnership with Palestinian and international human rights partners and NGOs in order to amass the largest possible number of signatures showing Palestinians’ unyielding commitment to their right of return to their homeland—a right guaranteed by International Law and relevant UN resolutions.

Batool said the campaign came at a time when efforts have been intensified by Israel and its allies, most notably the US, to negate Palestinians’ refugee status and, as a result, rescind their right of return to their homeland and delegitimize any institution providing assistance to the refugees, such as UNRWA.

PRC’s speaker defined the right of return as the right of Palestinian refugees to return to their homeland from which they have been expelled since 1948. It implies both first-generation refugees and their descendants, regardless of their place of birth or residence and their political, social, and economic condition.

The first speaker was Dr. Susan Power (BCL, National University of Ireland, Galway, PhD, Trinity College Dublin), head of Legal Research and Advocacy at Al-Haq, Law in the Service of Man.  She lectured law for seven years in Griffith College Cork and Dublin, Ireland between 2010 and 2017. Dr. Power has worked on the Control of Economic Activities in Occupied Territories Bill (Ireland 2018), submitted communications to the International Law Commission on the Draft Principles on the Protection of the Environment in Relation to Armed Conflicts, worked on communications and amicus curiae submissions to the International Criminal Court, presented on the Zero Draft Treaty for an Internationally Binding Treaty on Business and Human Rights and presented to the Catalan parliament on violations of international law in the occupied Palestinian territory. She has published academic articles in the Journal of Conflict and Security Law, Irish Yearbook of International Law and the Irish Journal of European Law, writing on issues of occupation law, amongst others.

Dr. Power gave an overview of the legal manifestations of apartheid in line with al-Haq’s position. She referred to the 1998 Rome Statute of the International Criminal Court which lists apartheid as one of the 11 distinct crimes against humanity, defining it as “inhumane acts committed in the context of an institutionalized regime of systematic oppression and domination by one racial group over any other group or groups and committed with the intention of maintaining that regime”.

In her view, this system of apartheid was outspokenly echoed in the words of extremist Israeli leader Ben-Gurion who called for the ethnic cleansing of Palestinians when he said: “We must expel Arabs and take their places”.

Dr. Power said the international community should work on ratifying the convention against apartheid and reconstituting the UN committee against apartheid and to adopt trade restrictions, arms embargo, and economic and diplomatic sanctions  against Israel. States should also adopt a legislation prohibiting the import of goods from illegal Israeli settlements into their territories.

She called on EU states to support the European Citizens Initiative, to respect the investigations of the international Criminal Court, and to cooperate with any arrest warrant issued against Israeli perpetrators of crimes against humanity.

The next speaker was Richard Boyd Barrett (TD), an Irish People Before Profit/Solidarity TD, who has been a Teachta Dála (TD) for the Dún Laoghaire constituency since the 2011 general election. Boyd-Barrett helped to organise mass protests against the war in Iraq in 2003 as chair for the Irish Anti-War movement. He has continuously politically fought for Ireland's Israeli Ambassador to be expelled, and to place sanctions on Israel, for its brutal treatment of Palestinians and its apartheid regime.

Boyd-Barrett leveled heavy criticism at the double standards of the Western powers when it comes to crimes against humanity, violations of human rights, displacement of refugees, and unjustified military aggression.

He said governments, particularly western governments, pay lip services to the idea of international law, democracy  and human rights which they evoke in the unjustified Russian aggression on Ukraine. At the same time, reports by Amnesty, Human Rights Watch, and the UN Special Rapporteur on the Middle East are confirming that Israel is an apartheid regime operating since it was founded in 1948 by systematically maintaining oppression and domination over the Palestinians. Israel is treating the Palestinians as an inferior race, invading their lands, brutally assaulting them, killing innocent people, destroying Palestinian homes, grabbing land, and systematically denying human rights and access to justice for millions and millions of Palestinians who have been forced out of their homes since 1948.

He said what is happening in Gaza, the ethnic cleansing of Palestinians in Jerusalem and the West Bank, along with the denial of refugees’ right of return amount to crimes against humanity.

Boyd-Barrett added that the double standards are so shocking and reveal a sort of cynicism, hypocrisy, on the part of EU and the US. He said these states refuse to draw the same conclusions even when evidence is presented in this forensic way as has been done by Amnesty, Human Rights Watch, and the UN Special Rapporteur confirming Israel’s oppression of the Palestinian people.

“Israel is guilty of apartheid and guilty of crimes against humanity, and yet, no western government has been willing to acknowledge the findings of those reports and to condemn Israel for its crime of apartheid”, he said as he condemned the silence maintained by parliaments and governments, saying they do not even have the courage to say the word apartheid nor to take the necessary actions and reactions, including imposing sanctions and arms embargo and prosecuting Israeli officials and politicians guilty of perpetrating that system of apartheid.

He concluding by saying: “We have silence, dismissal, and simply refusal to seriously engage with the facts of these reports. We cannot allow our world to be dominated by that sort of double standards and we have to insist that the Irish government and all governments across the world have to engage with the conclusions that these reports have drawn, that Israel is a regime perpetuating a crime against humanity in the form of apartheid against the Palestinian people”.

The final speaker was Mayss AlAlami, a Palestinian writer and activist. She is digital communications manager at the Palestine Institute for Public Diplomacy (PIPD), which is an independent, non-governmental organization that aims to shift discourse and policy with movements and decision-makers around the world through people’s engagement and advocacy.

Mayss elaborated on the normalized aspect of apartheid both as a concept and as a practice. She referred to recent reports by Human Rights Watch, Amnesty International, and B’Tselem about the systematic subjugation of Palestinians since 1948.

She defined apartheid regime as one which intentionally, from the onset, creates policies and laws that subjugate a people based on their ethnicity and race, which are categories that no human being gets to choose. By the same token, Israel is seeking to maintain a Jewish majority and supremacy at the expense of Palestinians.

According to Mayss, the findings of the aforementioned reports are not unprecedented; Palestinians have been for decades speaking out against this system of subjugation and oppression. She cited the examples of Israeli military checkpoints restricting free movement for Palestinians while allowing Jewish citizens to move freely and ad hominem and censorship campaigns continuously waged against Palestinians speaking about the reality of apartheid.

In her words,  peace negotiations are not sufficient to adjust the situation the Palestinians are currently suffering from. She said the international community should to take more seriously the international tools at hand such as International Criminal Court investigations.

“We have to take into  account boycott, divestment, and sanctions against Israel . For decades Israel has enjoyed an impunity that no other state in our modern time has enjoyed”, she said, adding that it is high time we recognized that these acts are crimes, that international law was indeed applicable on Israel, and that the double-sidedness vis-à-vis not just Palestine, but also Syria, Afghanistan, Iraq, be brought to a halt.

“Settler colonialism is not just about taking over or controlling an area but also replacing its indigenous population. Settler colonialism really allows us to understand the origins, the continuation, and intensification of the ethnic cleansing and forced expulsion and displacement of Palestinians from their own land”, she confirmed.

“We should allow Palestinian voices to lead the conversation; After all it’s Palestinians who know best what they are going through and we should no longer be subjected to proving our humanity every time we have to talk about ourselves”, she concluded.