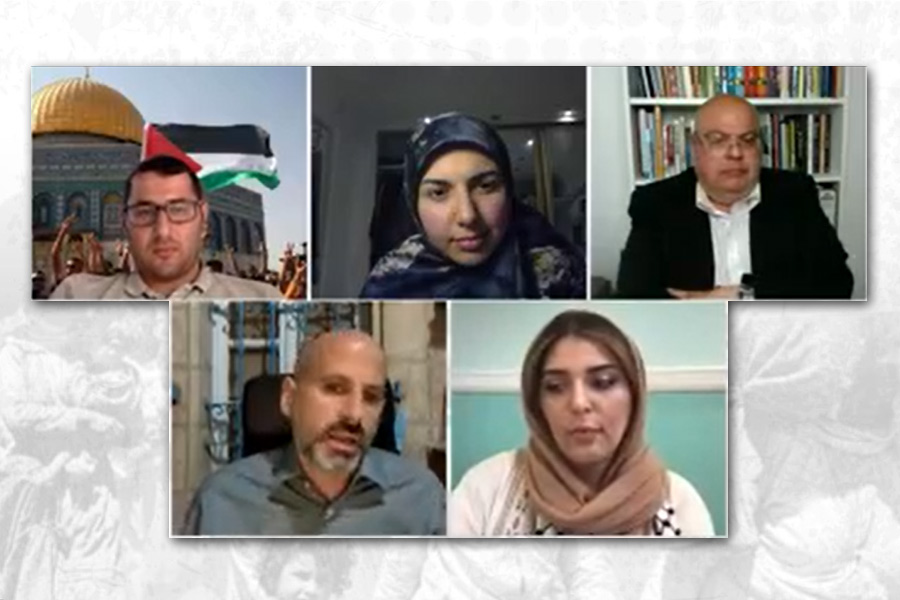 The Palestinian Return Centre (PRC) in London held a webinar to discuss the ongoing impact of the Naksah, when Israel captured East Jerusalem, the West Bank and Gaza, as well as the Syrian Golan Heights and Egypt’s Sinai Peninsula following a six-day war launched on June 05, 1967.

Chairwoman Batool Subeiti gave a brief introduction of Al Naksa, which literally translates to setback and marks the 1967 war which led to the second-largest mass ethnic cleansing of the Palestinians from their homes and land.

Batool said the Naksa was a continuation of a prior central event that paved the way for the 1967 war. Nineteen years earlier, in 1948, the state of Israel came into being in a violent process that entailed the ethnic cleansing of Palestine.

The first speaker was Toufic Haddad, a social scientist whose work focuses on the political economy of development and conflict in the Middle East, and Israel-Palestine in particular. Toufic worked as a journalist, editor, publisher, researcher, and consultant. He has a BA in Philosophy and Middle East Studies from Trinity College; an MA in Near East Studies and Journalism from New York University; and, a PhD from the School of Oriental and African Studies (SOAS), University of London (Development Studies).

His PhD was transformed into Palestine Ltd: Neoliberalism and Nationalism in the Occupied Territory, published by I.B. Tauris in 2016, with paperback edition out in 2018. He has also lectured at SOAS, and guest lectured at King’s College London, the Agha Khan University and Birzeit University.

Toufic stressed the importance of reviving discussions about what happened in 1967. He referred to this episode of Palestine history as “an aggressive, preplanned war”.

In his view, an important detail that has often been forgotten is the fact that his war was coordinated with Western powers, mainly the United States.

Toufic added that roughly 500,000 Palestinian refugees were created following the 1967 war after they were ethnic-cleansed by Zionist militias.

According to the academic, the 1967 Naksah created a contradiction for Israel: The first enemy was pan-Arabism and Nasserism. Because of the historical memory from Al Nakba of 1948 most Palestinians in West Bank and Gaza were able to remain in place (1/3 of the population) and this created the structural demographic contradiction that the self-proclaimed Israeli state until today tries to bridge. What is important to realize is that in order to overcome this structural contradiction, Israel needed to bring in as many Jews as it could to win the demographic war and create an ideological link with the land.

The second speaker was Nerdeen Kiswani, a Palestinian organizer from NYC. She is the founder and chair of Within Our Lifetime - United for Palestine, a community based Palestinian led organization whose goal is to revitalize the revolutionary spirit of the Palestinian community abroad in pursuit of a free homeland. She also studies law at CUNY school of Law, where she organizes with Students for Justice in Palestine.

Nerdeen said that as a result of the Naksah, 400,000 Palestinians were ethnically-cleansed and made into refugees and Israel occupied new territories.

According to Nerdeen, the Arab defeat of 1967 led to the growth of the Palestinian Liberation organization, which was founded in 1948 but grew stronger after that. Israel strived to have those refugees absorbed into neighboring countries like Jordan, Syria, and Lebanon. Many of these refugees were made into refugees for the second time for 20 years after having already been displaced during the Nakba of 1948.

“Now Palestinians who were displaced during the Nakba face the grim reality that their return is growing further out of reach”, she warned.

The activist referred to her father’s story. He was born in 1963 in Beit Iksa, Jerusalem, which her family was able to return to after initially being expelled in 1948. But after 1967, when he was just four-years-old, his family had to leave Palestine once again. Although he went back often for a visit and despite the fact that he was born there, he could not attain a Palestinian citizenship. His village was under the control of Jordan and they also moved to Jordan and so his citizenship became Jordanian.

“The fact that they continued to be treated as second-class citizens and were still considered as refugees was still a way to make them forget about their Palestinian identity and it never worked”, said Nerdeen. “This is the same reason why I cannot return to my homeland Palestine because I speak up against Zionist state.”

“The defeat of the Arab army by Israel marked the setback not just for the Palestinians but for Pan-Arabism as a whole”, she said. “Immediately after Israel won the war in 1967, it banned the Palestinian flag in occupied Gaza and the West Bank. Palestinian artists were arrested drawing for paintings epitomizing liberation and anti-occupation”, she said referring to Shrieen Abu Akleh’s funeral where Israel attacked mourners just for raising the Palestinian flag.

Kamel talked about how the violent dispossession and ethnic cleansing of Palestinians from their homeland in 1948, as Israel was created, and later in the 196è war impacted on his family and Palestinians and continues to impact to this day.

Kamel said back in the 1960s there were no Jewish Israelis in Jericho, Jerusalem and other parts of occupied Palestinian land.

“The hole point about our meeting today is not just the Naksa. It’s the continuing Nakba”, he said.  “The absolute forced introduction of a state onto Palestinian land… led to a situation where the indigenous population of Palestine has been denied their rights for 74 years and more (because of British mandate before that).”

He slammed the international community’s silence over Israeli crimes and aggressions such as when Israel attacked Sheikh Jarrah and AlAqsa Mosque.

“The irony of the situation is this: An occupying state defending itself from a people it has displaced?! Israel was continuing its policy to push Palestinians out of the areas they want”, said Kamel.

He added that a lot of what happened in 1948 and 1967 continues till today. Israel enjoys a sort of unjustified impunity. Over the past week alone, over 10 Palestinians were killed in cold-blood. The brutality of the Israeli regime did not only materialize in attacking the living but also the dead through armed interference in funerals being held for victims of Israeli crimes. “Almost any funeral procession is attacked”, he said.

The final speaker General secretary of the Arab Labour Group Omar Mofeed stressed that it is always important to remind everyone that Israel is a colonial state built to kill and expel the Palestinians.

He said “after 74 years of occupation, after 1948 Israel tried to split Palestine and the people. In 1967 Israel tried again to split the Palestinians. The funny fact is that Israel is giving Palestinians their national ID numbers. Gazans are not allowed to go to Jerusalem and the West Bank and vise versa. For the diaspora, being a Palestinian does not give you the chance to visit Palestine.”

He said a repercussion of the 1967 war is that Gaza and West Bank, which were under the Egyptian and Jordanian control, are now under the Israeli military law. Israel is subjecting Palestinians to humiliation through its siege on Gaza, crackdowns on border crossings, and attempts to normalize occupation.

“The international community is not just silent; They are complicit. For example lots of arms-producing facilities bound for killing Palestinians are based in the UK, where there are also several Israeli military labs”, he concluded.

Palestinians in the “occupied Palestinian territories” have since been subjected to a brutal Israeli military occupation as well as the activities of armed, right-wing Jewish settlers.