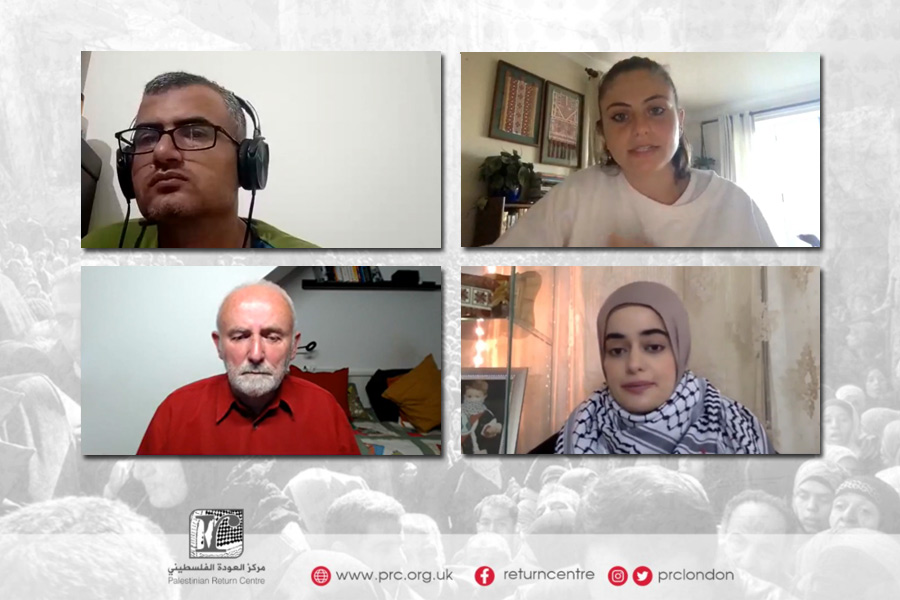 On the sides of the 50th Human Rights Council session currently held in Geneva, the Palestinian Return Centre (PRC) held a webinar (side-event) commemorating the World Refugee Day, an international day designated by the United Nations to honour refugees around the globe and people who have been forced to flee their home country to escape conflict or persecution.

Three activists spoke in the webinar, which was chaired by Mick Napier, a founding member of Scottish Palestine Solidarity Campaign.

The first speaker was Ahmed Abu Artema, a Palestinian journalist and peace activist. He is the author of the book "Organized Chaos" and numerous articles and one of the founders of the Great Return March. He is a refugee from Al Ramla village in Palestine.

“Today June 20 marks the World Refugee Day”, said Abu Artema. “When we speak about refugees we should remember the Palestinian refugees, the longest-running refugees in the world. Since 74 years this crisis is still unsolved because there are political reasons aiming to keep this problem. It’s not a problem because of normal reasons it’s because there’s a political reason to relate between the refugee crisis and the security and safety of the state of Israel.”

“The establishment of Israel itself from the first moment was at the expense of Palestinian refugees”, he said. “We became refugees on the moment Israel was established, on the moment that western colonization decided to establish the state of Israel. At that moment they forcibly kicked out about 750,000 Palestinians from their towns and villages, including my own family.”

“Israel thought with time we can end the problem, that the generation of Nakbah will die and next generations will adapt with a new reality; But this didn’t happen”, he said. “I was born in 1984. My father was born in the diaspora. My grandfather was kicked out from his home in Ramla. For us young generations after Nakba we still believe in and dream of our right to return to our homes. We’ve been waiting for 74 years the day when we will return. The new generations did not and will not forget about their right of return”.

The second speaker was Jeanine Hourani, a Palestinian-Lebanese organiser, storyteller, and researcher currently based in London having spent the last nine years in Naarm (Melbourne). Jeanine has previously held roles in policy, advocacy, and research with a focus on refugee rights, public health, and gender-based violence. She currently serves on the board of The Australian Muslim Women’s Centre for Human Rights and The Stateless Children Legal Australia Network.

As a result of her statelessness, Jeanine had been deprived of many vital rights and privileges, including access to education, healthcare, and free movement.

“There seems to be a dominant narrative—that the solution to Palestinian dispossession and statelessness is just statehood. However, she referred to an interview by CNN with Palestinian human rights activist and academic Noura Ereikat who was asked “What’s better for Palestinians a bad state or no state at all?” Her response was as follows: “That is a very strange question. It’s like asking someone who’s home got stolen – we’ll stick you up in the attic with absolutely no water…but we’ll give you some rations. In your own home, in the attic. What’s better – a roof over your head or no roof at all?”

Jeanine further quoted Noura as stating: “Palestinians have not been demanding a state; Palestinians have been demanding freedom dignity and equality. They want their right to return to their homes, they want the right to belong in their homes, to cultivate their lands, to teach their children, to practice their traditions and to speak their language. This is what Palestinians are fighting for, not just a piece of land on which they can have the flag under an apartheid state; This is not a gain; This is about life or death”.

“The first time I visited Palestine was in 2019 and the Israeli officer interrogated us for six hours before they let us through”, said Jeanine. “Borders are a form of colonial and imperial domination. The existence of borders is the foundational principle that enabled Israel to create a state and maintain domination over the Palestinians.”

The third speaker was Assala Sayara, a social worker, social justice activist and storyteller of Palestinian descent, currently living in Sydney, Australia. Her ex-teacher Barbara Arambatzis once introduced her with a touching message: “She bleeds Palestine and she deserves recognition for her efforts in maintaining the passion for her motherland”.

Assala started her remarks by saying: “Palestine is a land of peace, authenticity, hope, and resistance”.

She said that an estimated 6 million Palestinians live in the global diaspora, an experience that leads to existential questions of the sort of “who am I?” or “Who are we?”.

“The Palestinian community is rooted in systematic displacement because of colonization and occupation”, said Assala. “Today, I’m here to acknowledge the effects of the Israeli occupation and challenges the Palestinians in the diaspora experience, including  disconnection from their culture and identity, loss of belonging, and feeling out of place.

According to Assala, “the impact of occupation goes beyond time and location”. She dreams to reconnect to a homeland which is “far but very close and found in every heart” and this connection “fills in the gaps of belonging”.

“As a Palestinian yearning for home, my experience is encapsulated in the words of Mahmoud Darwish ‘I am from there, I am from here, I am not there, and I am not here”.