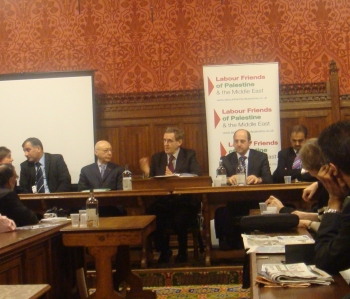 UK members of the parliamentary delegation to Gaza, organised by the European Campaign to end siege in Gaza and the Palestinian Return Centre presented ‘Eyewitness Gaza' in Westminster on Monday evening.


Joining the esteemed panellists were Lord Steel, who is going to Gaza this week, Majed Al Zeer Director of the Palestinian Return Centre and Arafat Shoukri, chair of the European Campaign to End the Siege on Gaza. It was a highly anticipated event jointly organised with Labour friends of Palestine following the largest ever delegation to Gaza which comprised of 60 parliamentarians from 13 different European countries and resulting in an authoritative report.

The chair of the event Martin Linton began with a eulogy of the organisers. All the representatives and the organisers shared their gratitude towards the Egyptian authorities for allowing the delegation to enter Gaza. The importance of witnessing the daily human tragedy in Gaza was widely shared to break the information blackout over Gaza in the west.

The despair and frustration was palpable on an emotional night. ‘This was the most extraordinary experience of my life' said Bob Marshall Andrews, ‘nothing prepares you for what we saw and heard in Gaza'.

Baroness Jenny Tonge provided a moving account of the health challenges faced by those she met and interviewed. She was struck by the level of post traumatic stress which will have a lasting effect on victims and on the of Palestinian society to recover and prosper.

Sir Gerald Kaufman, the leader of the delegation, made a very poignant speech noting the responsibility of the UK and the EU to lift the siege. ‘what we saw was collective punishment in Gaza and it is the responsibility of the people of this country and western democracy to remind everyone of the atrocity taking place every day before our eyes'. ‘Gaza was worse than I ever thought' said Sir Gerald ‘it was incredible and callous destruction'. With the trauma inflicted on Palestinian children, sir Gerald argued that Israel was condemning itself; it is harvesting a generation of disaffected children driven with rage and anger at the injustice and intolerable situation imposed on them.

Lord Ahmed, a member of previous delegations, spoke of the total hypocrisy of the policies adopted in the region. In mentioning the 2006 election win of Hamas he said ‘the British government was prepared to engage in a long bloody war which killed hundreds of thousands in Iraq with the intention to spread democracy and here in Palestine there was democracy in action, not dictated by the barrel of the gun and we spurned it'.

Jeremy Corbyn spoke of his personal anguish in coming to terms with the terrible conditions, ‘ I felt bitter, frustrated, angry and unworthy' he said, in describing his emotions of witnessing the conditions in Gaza and personally struggling to come to terms with the situation.

Richard Harrett, Labour MEP said ‘the ability to make peace was disappearing' after reflecting on the situation in Gaza. He echoed all the previous speakers' sentiments that the EU had to take effective measures, which it has in its disposal, such as maintaining its refusal to upgrade the EU Israeli trade agreement and pushing for it's suspension in line with Article 2 which dictates respect for human rights.

Dr Arafat Shoukri then spoke of the work of the European Campaign and its continued effort to address the humanitarian crises and facilitate the political process, ‘this was a human disaster where many authorities were complicit and should feel ashamed' he said.