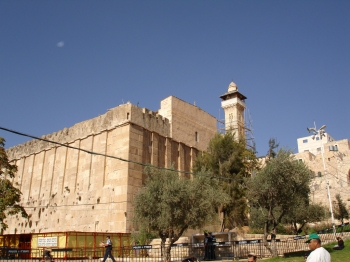 The Israeli governments designation of two more places in the West Bank as "Israeli Heritage Sites"-the Ibrihimi Mosque (or Cave of the Patriarchs, a mosque that Abraham built and is buried in along with his wife Sarah) in Hebron and Rachel's Tomb near Bethlehem, is a provocative move threatening more violence and instability.
Israel since its occupation of the West Bank has initiated a system of "sharing" the mosque between Jews and Muslims that has gradually become increasingly restrictive and detrimental for Muslims. This intensified further following a massacre at the Ibrahimi mosque in late February 1994, committed by Baruch Goldstein, an American Jewish immigrant who walked in his Israeli military uniform past Israeli guards and shot randomly at Muslim men praying at dawn during Ramadan killing 29 and injuring another 125 ( his grave in Kiryat Arba is now a site of reverential visits for some in the settler movement).Israel's audacious attempt is an implicit affirmation of Baruch Goldstein's extremism who also wanted to claim the Mosque for Jews only and was prepared to commit mass murder to deny Palestinians access to their historical site. Israel has demonstrated its clear intention to do just that although be it by a different method.

The Israeli act is illegal, provocative and confrontational as these sites are part of the land occupied during 1967 war. This land according to international law is Palestinian land and vitally important for any future peace settlement. Such audacious and reckless acts are the product of a culture based on a total disregard for Palestinian rights and international law.

General Director of PRC, Majed Al-Zeer expressed his deep anger and sadness towards the International community which has remained silence over Israel's ongoing bravado and disdain."The international community is complicit through its silence. Successive Israeli governments continue to steal Palestinian lands, build illegal settlements "colonies", killing civilians, stealing resources and driving Palestinians out from their homes in Jerusalem. Now Israel is taking measures to expropriate that which is immensely symbolic for Palestinians, begging the question about its sincerity in resumption of negotiation" Said Al-Zeer.

According to Al-Zeer, such acts confirm the fragility of the peace process that Israel claims it adheres to. If the Quartet is truly serious about peace they must nip such provocation in the bud before it becomes a firestorm and recognize Palestinian rights instead of forcing further concessions upon them. PRC is deeply concerned at Israeli attempts in controlling religious sites in Jerusalem and in Hebron exclusively for themselves. These places are dedicated to the worship of God and not for political maneuvers and to stoke fear and division. PRC believes these places are part of the Palestinian religious heritage. This has been proved by Israelis themselves whose own excavation found religious artifacts that goes back centuries.

More shockingly some media outlets show complicity with Israeli propaganda. AFP covered the Israeli decisions with a heading, "Clashes over Israeli plan to restore West Bank sites", the title gives the impression that Palestinians stole these sites and Israelis are reclaiming their rights. PRC urges AFP and other media outlets to cover the conflict impartially and not be patrons of Israeli propaganda.