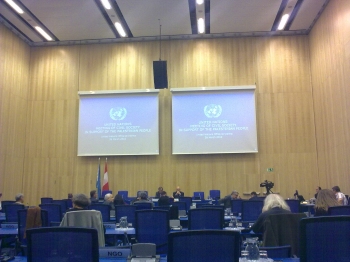 The Palestinian Return Centre participated in a three-day Seminar, which began on the 24th of March 2010, organized by the UN Committee on the Exercise of the Inalienable Rights of the Palestinian People, under the theme "Building institutions and moving forward with establishing the State of Palestine".

The goal of the Seminar was to raise the profile of and garner support for the Programme to develop institutions for Palestine, Ending the occupation, establishing the State". The Seminar also assessed the current socio-economic situation in the Occupied Palestinian Territory; discussed the urgency of bringing relief and reconstruction to the Gaza Strip; considered approaches to advancing the Palestinian State-building agenda; and looked into ways of mobilizing broad international assistance in support of the Palestinian economy and alleviating the suffering of the Palestinian people.

On day three the meeting of civil society in support of the Palestinian People commenced. The focus of the Meeting was civil society action against the separation wall in the Occupied West Bank, including in and around East Jerusalem. The Meeting provided civil society organizations with an update on the current situation with regard to the construction of the wall, discussed their role in raising public awareness about its effects, and allowed them to inform about their current initiatives in that regard. The Meeting also highlighted the importance of upholding international law, including the Advisory Opinion of the International Court of Justice regarding the wall.

The seminar began with an expression of concern from the UN, ‘The situation in the Occupied Palestinian Territory remained of concern, particularly in Gaza and East Jerusalem', Secretary-General Ban Ki-moon said in a message delivered by Maxwell Gaylard, Deputy Special Coordinator for the Middle East Peace Process and United Nations Resident and Humanitarian Coordinator for the Occupied Palestinian Territory.

Reporting on his recent trip to Israel and the Occupied Palestinian Territory, the Secretary-General said "the closure is unacceptable, unsustainable and counterproductive". A durable solution required the opening of the crossings for both humanitarian and commercial goods to and from Gaza. Three Plenary sessions were arranged with experts outlining the vision of the plan adopted by the UN and supported by the Quartet. PRC representative, Nasim Ahmed, highlighted some of the stumbling blocks that were overlooked in the presentations, ‘every proposition is only as true as the strength of its assumptions and the UN plan makes many very weak if not false assumptions which undermines its strength' argued Mr Ahmed. ‘ the plan assumes Israel will unilaterally allow Palestinians to declare a state and there is enough evidence to prove otherwise, it assumes that the quartet will allow Palestinians to have a state irrespective of Israel's interest as long as there is an economic version of Hong Kong in the West Bank, it assumes all Palestinian factions will agree and it marginalizes key political parties, it further assumes that it can address long and deep political problems through economic initiatives, and this is neo liberal economic fantasy which reduces every human problem to an economic problem' argued Mr Ahmed.

The PRC representative also spoke about the plight of refugees, who comprise the vast majority of Palestinians that are overlooked in the plan adopted by the UN. Mr Ahmed said ‘as an organizations who is very close to refugees and understands their concerns, what message can we take for them from this seminar, what is in it for them, what is their prospect for the future? Is the UN again on course to marginalize the rights and voices of the majority of Palestinians'?