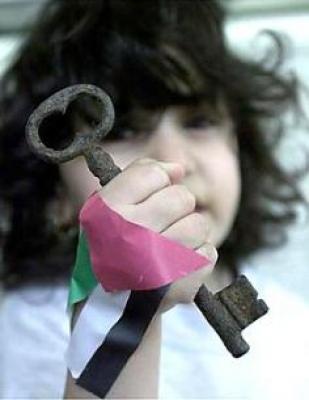 "Return is Inevitable & Freedom for our Prisoners"

The Diaspora story of Palestinians in Europe exemplifies a very important part of Palestinian People's experience. That experience, of those who were expelled compulsorily into the camps in the neighboring countries and elsewhere in the world. The key part of the Palestinian cause is refugees (Palestinian Refugees where kicked by force from their houses and then replaces by Israel now) issue. Solving the Palestinian cause "Dilemma" requires solving the key issue of the refugees. Apart from that issue, finding a solution will be impossible.

Palestinian presence in Germany is the biggest and most central out of Palestine. The number of Palestinians in Germany nears to 100000; a great majority of them came from the refugee camps in the Arab countries. More specifically, they came from Lebanon as the civil war erupted some years ago. 25000 of them reside in the capital, Berlin. From this perspective, the 8th Palestinians in Europe Conference titled "Return is Inevitable & Freedom for our Prisoners" considered to be an outlet to educate the Europeans about Palestinian cause. It will help out to demonstrate the just Palestinian cause and to show the Palestinian account which has been replaced by the Zionist account.

As Berlin is the host of this event there are many indications to show, especially the historical side of Berlin which is the 2nd world war. Following that war, waves of migrations went to Palestine in a step of establishing the state of Occupation, Israel. This makes it clear about the historical responsibility towards the suffering of Palestinians and its ramifications of the Nakba and ethnic cleansing.
This conference will give a chance for Palestinians in Europe who are part of 6 million refugees, to express their views about all the key issues regarding Palestine. It is also to highlight on their efforts in the European countries in this respect. Additionally, to reject what others trying to do on their behalf to give up their rights. More importantly, it's to show their presence on the Palestinian political arena and make it a fact that they can't be ignored.

A number of researchers specialized in the Palestinian cause, European politicians, journalists, thinkers and others will participate in the event. On board of the conference, a number of issues will be on the table for fruitful discussion. The issue of Palestinian prisoners will be discussed and special focus will be on their inhuman suffering and conditions and the torture they pass through. The key issue of the Right of Return for Palestinian refugees will be on the agenda as well. Discussion will be made on the work of Palestinian NGOs in Europe beside the problems of new generation and the attempts to link them with their traditions and legacy.

Dozens of Palestinian organizations in Europe will take part in the event. The expected number of audience will be huge and special workshops and programs will be set up for children, women and youths.

Media outlets will cover the event as Al Quds TV will be the official sponsor beside other TVs and media outlets.

Photo Galleries about Gaza, Prisoners, Jerusalem, Apartheid Wall and the Nakba will be showed. Whilst, Dabka shows, Music and Nasheed will be played.