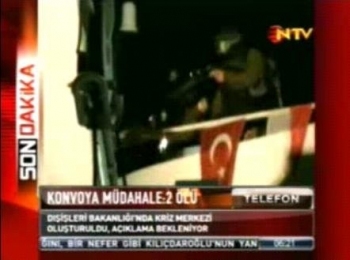 The Palestinian Return Centre (PRC) in London condemns the Israeli piracy attacks against the civilians on boards of Freedom Flotilla.PRC, a co-founder of European Campaign to End Siege (ECESG) which is a partner in the freedom flotilla suggests that Israel reached the top stage of state lawlessness regarding International law.

Majed al zeer, General Director of the Palestinian Return centre expressed his deep anger towards the heinous crime of Israel.
"Israel is being encouraged by International community to continue its crimes against humanity. A number of UN reports since the start of the Palestinian plight passing by Jenin massacre in 2002 and lately Goldstone Report have been all rejected by the state apartheid of Israel. This pushes Israel reach a degree of madness to commit more crimes as it will never be held accountable" said al zeer
According to PRC, the boats carry a number of European MPs, politician, international activists were in board.

PRC calls for an immediate investigation to persecute the Israel leadership which has given the direct orders of attacking ships.
The centre expresses its deep concerns regarding the western Media outlets coverage, especially the BBC. According to PRC, BBC has showed some sort of bias by presenting the Israeli account while not bringing the Palestinian side. The type of questions for the Israeli side doesn't show the accurate fact that it was against civilians.

BBC English version, as a national British body should be neutral and represent all parties.

Shockingly, the account of BBC totally relies on Israeli sources. For example, BBC reporters narrated the Israeli account through contacting their London studios. None of the pro-Palestinian activists or organizations has been interviewed. This shows great bias in the coverage of BBC English version.

BBC English version coverage justified the Israeli attacks that these boats carry weapons. Although, these boats have been inspected by Turkish border authorities and an independent Turkish company before sailing.

Around 20 people so far have been killed as Israeli commando units stormed of the Freedom Flotilla. More than 60 passengers injured in the incident too. PRC call on immediate actions of protest against the government's silence about the Flotilla to Gaza and request immediate intervention

The activists were on the International territorial waters when the attack happened. There were in a state of self defence without any kind of weapons. However, many media outlets manipulate and turn this vice versa.

PRC suggests that these acts are only one part that has been caught on cameras on board of the boats. However, there has been more monstrous acts and crimes committed against Palestinians since 1948 and still but never got public.