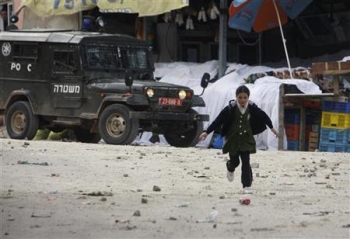 With the world focused on the 2010 world cup in symbolic South Africa the Palestinian Return Centre (PRC) is calling on the world community to remember the ongoing struggle against apartheid and siege in Palestine.


The world is invited to openly support Palestinians against the racist apartheid regime. The Apartheid regime of Israel should be dismantled as it deprives the Palestinians their basic rights to their lands and homes from where they were expelled 1948. This regime of apartheid is depriving Palestinians from their right of self determination and their independent state.

The World Cup must be a clear reminder of the Apartheid and separation wall in the West Bank. The support for Israel is a support for this wall which separates and displaces people. The wall has turned Palestine into a new South Africa where people are separated like Black South Africans into camps and Bantustans.

The massage of sport carries friendship and brotherhood with all communities worldwide. The world cup is an opportunity to show global support for Palestinians.

PRC invites Human Rights organizations, activists and supporters of Palestine to participate in its campaign, "End Apartheid of Israel in Palestine" we invite you to hold and wave the Palestinian flag during the world cup games.

Your participation towards ending apartheid begins with the simple endorsing of freedom and justice for people of occupied Palestine. You can also print our campaign posters in this link. Print these posters out and circulate it all over as a sign of support for the oppressed people in Palestine. The posters can be accessed here: www.postersworld.net End.