An international campaign in support of Palestinian economy 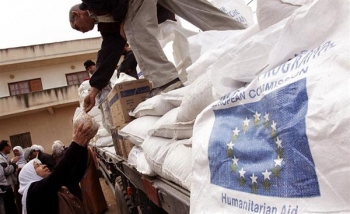 The seminar titled "Towards an effective role for the Palestinians abroad in supporting the independence of the economy at home" was opened by the director of the Palestinian Return Centre, Majed Al-Zeer, who pointed to the importance of this seminar at these most difficult of times for the Palestinian people. Where "threats come from various countries to cut off aid from the Palestinians due to the free choice made in electing a new leadership to represent them. The effect of these threats has become real, with "Israel" being quick to close the crossings into the Gaza Strip, leading to severe shortages in primary foodstuffs, as we have witnessed in the last two days". Al-Zeer added that "on the basis of the principles and fundamentals of the Palestinian people, and that it is one people despite the huge distances that stand between its members, we at the Palestinian Return Centre in conjunction with many Palestinian and Arab organisations have decided to launch an international campaign to help our people in the West Bank and Gaza Strip, alleviating the effects of international pressures, and so support the resilience of our people in face of the Zionist machinery of oppression".

The basis of the idea for this campaign, as the organisers say, is that "each Palestinian community adopt a project from many in the West Bank and Gaza Strip, then promote it in the country of residence, such that a bank account is opened, and anyone wishing to donate can pay into that account, directly benefiting the project. There will also be coordination between the charity organisations that work for Palestine in that country, and to explore local alternatives for the exchange".

The president of the Palestinian Forum in Britain, Zaher Al-Birawi in his speech applauded this idea, and thanked the Palestinian Return Centre for adopting and promoting it. He said that "this campaign is the practical response that can be realised by the Palestinian and Arab communities in regard of international pressure on our people at home, and the attempts at blackmail, in order to secure an abandonment of immutable principles and rights".

The president of the Palestinian community, Rajab Shamlakh, greeted Palestinian mothers at the beginning of his speech on the occasion of Mothers' Day. He called for serious action to ensure success of this international campaign that "shall have highly important results for the Palestinian people in the West Bank and Gaza Strip, in the case where it is successful, as is the hope".

As for the perils and challenges relating to Al-Quds, at the forefront the continuing Judaisation process being implemented by the Israeli government, Dr. Ghada Al-Karmi, president of the Al-Quds International organisation, was far-ranging in her discussion of the perils faced by the holy city and the Jerusalemites in particular, and their national and educational institutions, like Al-Quds University. She called for the need to extend rapid help to the students of that university, in light of the harsh and tragic conditions they suffer; beginning from the difficulty of access due to the multitude of military checkpoints, through to the high material cost of study, and on to the sharp shortages in educational materials, arising from the policy of closures implemented by the Israeli occupation. Al-Karmi emphasised the importance of maintaining links with our people at home, through this support, in order to strengthen their presence in Al-Quds, and confront the Judaisation process.

In terms of the practical steps to support the Palestinian people, and alleviate their suffering, the president of the Islamic Initiative in Britain, Muhammad Sawalha, spoke extensively about this, enumerating important matters that needed to be taken up by the Palestinian people both at home and abroad, to lessen the effects of any aid being cut off. He underscored the necessity of working towards a Palestinian economy independent of the Israeli economy, despite the immense difficulties this presents, especially since the occupation during its long years in Gaza and the West Bank, had worked quite exceptionally at making the Palestinian economy subordinate to the Israeli economy, and forcefully combating any attempts at [economic] independence. Sawalha said "the opportunity is there now to work seriously for the independence of our economy. However, if it was unavoidable to deal with the occupation by reason of the practical reality, then let it be restricted to the vital necessities of daily life, and boycotting everything else that is secondary".

Following on, the renowned Palestinian lawyer, and Queen's Counsel, Michel Abdel-Messih, dwelt on some legal aspects relating to western threats of cutting off aid to the Palestinian people, and the violation of the obligations of these states towards a people under an occupation, which they had been instrumental in establishing throughout past decades. On this occasion, he called for consolidation of the ranks of the Palestinian community, to be better able to give real support, whether material, political or moral.

He was followed by the Palestinian journalist, Abdel Bari Atwan, editor of the London-based, Al-Quds Al-Arabi, who presented aspects of the current political situation of the Palestinian cause, after the Palestinian people had elected the Islamic resistance movement, Hamas. He pointed out that this choice by the Palestinian people had been the wise one, and had been a forceful slap in the face of the forces of surrender and ignominy, as well as western powers, America, and Israel, after the people had had enough, with nothing left to lose, when abandoned by everyone. On the other hand, Atwan praised the new leadership, and was full of hope in it, saying: that it was the first time in his life where he felt optimistic in relation to the Palestinian situation. The reasons for optimism being many, key was that this leadership was "clean in hands and tongue", and had come out of the alleyways of the refugee camps, and so was better equipped to feel the pulse on the street, and so respond to it. In addition, it was not prepared to compromise and give up the rights of the people.

Prime Minister Haniya: Steadfast on the principles and rights of our peopleIn a surprise for the assemblage in the lecture hall, the incumbent prime minister, Ismail Haniya, participated through a telephone address in which he praised the audience, and the Palestinian and Arab communities, as well as thanking the Palestinian Return Centre for this important initiative in support of the Palestinian people at home. Prime Minister Haniya briefly touched upon the difficult circumstances under which the Palestinians in the West Bank and Gaza were living. He stressed the need for "the participation of everyone in assuming the responsibilities that we have shouldered, and confront the challenges forced on our people". He pointed to the importance of the role of the Palestinians in the Diaspora, who are a part of this people, whose ties and links were unbreakable. He ended his speech by promising a resolute hold to the Palestinian principles and rights, whatever the temptations or the pressures, while at the same time striving with all their strength and resources to realise the manifesto that Hamas had been elected on, concerning: reform, combating corruption, putting the Palestinian household in order, and alleviating the daily hardship meted out by the reality of occupation. The address by Prime Minister Haniya was met with widespread enthusiasm from those present, who applauded him for his speech and his posture.

 Supporting education is a real investment that enables the student to complete his study and acquisition of knowledge, to graduate and be able to support his needy family, and benefit society. Hence, support to the student had achieved its aim, by taking the student and his family from the circle of poverty and need, into that of self-sufficiency, and self-reliance in building the future. Preventing education professionals from emigrating in search for material security, as fees are a fundamental source of funding for salaries, and other university expenses, and that the financial well being of teaching staff was an important factor in the continuity of the educational process, and so the economic cycle. Aid to universities and colleges, encourages them to develop investment projects, as a precursor for complete freedom from the yoke of foreign aid. Many universities today, provide studies and consultancy for the implementation of private sector projects, which is an important factor in developing the economy of the country and its independence,

The presentation was followed by comments from the audience that focused on importance of this campaign, and of widening it to include all Palestinian and Arab communities residing in the west. Among those who spoke was the Palestinian businessman, Muneeb Al-Masri, who praised the organisers and the idea for the campaign, proposing another project, on the lines of establishing a Palestinian Investment Fund, in which every Palestinian in the world would contribute one US dollar a day, so that we would receive 6 million dollars every day, to be spent on the various projects in Gaza and the West Bank. The idea was met with enthusiasm; the organisers promising to study the idea and float it among the different organisations working in Britain to ascertain the feasibility of implementing it, and promoting it widely across all areas of Palestinian presence.

There was also a comment from a Kuwaiti citizen, Abdullah Al-Hajri, who pointed to the importance that there be a project of "adopting a Palestinian student" by Arab populations. Each Arab family would sponsor a Palestinian student, and undertake to cover all his expenses until graduation, in a way that would strengthen the ties of brotherhood among peoples, while at the same time, Arabs would feel that they were part of the battle, and achieve support for the internal economy.

At the end, a follow-up committee was formed from the participating organisations, to manage the campaign, as well as the initiatives and proposals put forward by the audience. Muhammad Jameel, managing director of Educational Aid for Palestinians, registered since 1993 with the Charity Commission in Britain, tasked with field direction of the campaign, said that his organisation was fully prepared for all the detailed follow-up of the campaign. Jameel pointed out that "the total donations from individuals and entities in the United Kingdom to his charity last year had reached a quarter of a million pounds sterling". The organisers promised to promote the campaign in the various European countries, lend it support, and continue until its hoped-for aims were achieved.