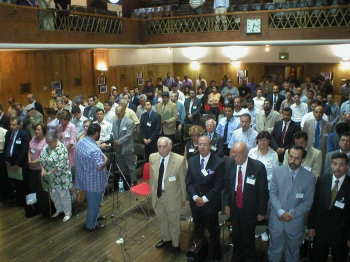 London, July 19, 2003 (PRC) - Europe‘s Palestinians in the conference organized by the Palestinian Return Centre in London: "We will not relinquish the right to return"


To assert their unwavering commitment to the right to return, representatives of numerous Palestinian institutions and organizations, as well as many Palestinian dignitaries from fifteen European countries met in London to denounce the alien voices which rise from time to time to call for surrendering the right to return.

The conference held on Saturday July 19th 2003 in the Holborn in central London was attended by a vast audience in the presence of a large number of diplomats and representatives of the Foreign and Arab embassies in Britain, in addition to prominent Palestinian figures such as Dr. Haidar Abd al-Shafi (Gaza), Professor Nassir Arouri (USA), Dr. Salman Abu. Sitta and Bilal al-Hassan. The participants in this conference -which is the first of its kind in Europe- insisted on the necessity of commitment to the right to return and outright rejection of any attempt to surrender, or even tamper with it, under any pretext whatsoever.In his opening speech, Mr. Zahir al-Birawi Chairman of the Board (PRC) maintained that the conference was convened under very difficult circumstances and in dangerous and worrying times. "We, he continued, must thus stand shoulder to shoulder and join hands with all the honest men and women engaged in the struggle for the protection of the right to return from the designs not only of its enemies but its friends too, who were driven by their narrow personal interests to turn their backs to their people's sacrifices and its ongoing tragedy."The centre vehemently denounced the proposals, initiatives and misleading opinion polls, which do nothing but promote the interests of the occupier and provide it with the much needed moral and political cover at the expense of the Palestinian people's rights. He said in conclusion to his speech that the geographic remoteness of Europe's Palestinians and relative comfort of their situation will never prompt them to accept any resolutions that did not ensure a full restitution of their rights, foremost return to their lands and villages.

The guests for their part insisted on the importance of the conference, as a great gathering of institutions and individuals from various European countries which gives a voice to the voiceless Palestinian refugees scattered all over the globe and represents their unflinching commitment to their right to return to their homes. Dr. Haidar abd al-Shafi laid special stress on the vital role played by Palestinian communities in Europe, thanks to the facilities they have at their disposal, which they must use efficiently in support of the Palestinian cause.

Professor al-Aruri maintained that it is crucial for refugees to rally around the issue of return and actively strive to marginalize the alien voices calling for the burial of the right to return.

Part of the Particpants...

Dr. Salman Abu Sitta praised the Centre for its pioneering efforts in defense of the sacred right to return, while strongly denouncing the role played by Sirri Nseiba who had met Ami Ayalon head of Israeli intelligence services in the latter's home, which had before the catastrophe been home to the Madhi family which had been displaced from its village Ijzim.

Mr Bilal al-Hassan pointed to the impossibility of any solution to the Palestinian problem without the resolution of the refugees' issue and the danger of dealing with the matter as that of a few territories occupied in 1967. This he said would never bring Peace to Israel.

All the delegations that participated in the conference expressed their absolute, and unequivocal commitment to the right to return and repudiation of all attempts to relinquish it. Their presence in the conference, they argued was itself a testimony of such commitment.

In conclusion, the conference congratulated the Centre on this valuable initiative that made it possible for Europe's Palestinians to express their position vis a vis the recent developments in the Palestinian arena and rejection of any proposal that did not ensure their return to the homes and lands they had been displaced from in 1948. They furthermore, praised the role played by popular institutions striving to safeguard the right to return, both inside the occupied homeland and in the Diaspora. The work of such institutions, they insisted, must be supported that they may succeed in realizing their mission effectively.

A number of Palestinian figures attended the event...

In addition, the participants expressed their firm commitment to return to the homes out of which they had been driven, as a fundamental individual and collective right acknowledged by divine legislation and international conventions and laws. This right is enshrined in a number of United Nations' resolutions, including resolution 194, which recognized Palestinian refugees' right to return and compensation. Return is also an individual right which cannot be dealt with by representation and is furthermore an inalienable right that does not lapse by prescription and remains unaffected by the founding of a Palestinian state on any part of Palestine.

In conclusion, the participants refused partial return to Palestinian Authority controlled territories, or the return of the first generation displaced in 1948 as a humanitarian solution, in the context of the so- called "family re-union" plan, which is nothing but an attempt to bring an end to the right to return