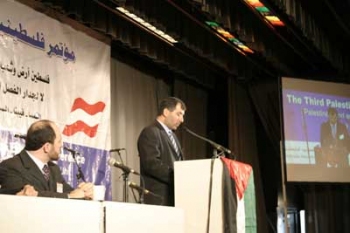 Vienna, May 7th, 2005 (PRC) - The Palestinian Return Centre, London, the Palestinian Association in Austria and the Expatriate Society in Austria organized a well attended conference of Palestinian communities in Europe under the title ‘‘Palestine: Land and People - an integral and indivisible unit. No to the racist wall in Palestine'. Representatives and delegations of Palestinian communities from 21 European countries participated in the conference. Several members of the Arab diplomatic corps in Austria, officials from the Austrian government, as well as prominent members of Arab and Muslim communities participated.


A number of papers were presented at the conference and discussed in open workshops. Several leading academicians and Palestinian opinion makers participated in the evnt. They include the Chief Judge of Palestine, Shaykh Taysir Al Tamimi, Father Ata Allah Hana, the chief spokesman of the Orthodox Church in Jerusalem and Head of the Political Bureau of the Palestinian National Council, Mr. Abdullah Hourani. Also among the participants were Jordanian Member of Parliament, Dr. Hayat al Massimi, Palestinian writer Mr. Rashad Abu Shawir, Palestinian thinker, Munir Shafiq, and Dr. Raid Nu'ayrat, Head of the Department of Political Studies at Al Najah National University in Palestine.

2. The conferees warn of the racist separation and annexationist wall that has been condemned internationally and still forces the Palestinian people to live in isolated enclaves, expropriates their land, and imprisons them in what is effectually a huge prison. It denies Palestinian inter-relations internally and carves up their land. Accordingly, the conferees urge the international community and concerned parties to intervene immediately to force the Israeli authorities to dismantle the racist wall whose extension is ongoing on Palestinian land. The conferees urge them to impose deterrent sanctions on Israel because of its shocking violations and expansionist conduct.3. The conferees reaffirm their adherence to the right of return to their homes and lands from which they were expelled in 1948. This is an established right in human rights conventions. It cannot be compromised, surrendered, bargained or voted upon in referenda. It is an indivisible right that cannot be reinterpreted. The conferees strongly reject attempts to circumvent the right of return or infringe upon it in any form. They salute the steadfastness of the Palestinian people in Europe who have preserved their Palestinian identity and remain persistent in their demands for repatriation to their homes and usurped lands. This they share with their compatriots in exile and in Palestine. The conferees also salute the united stand of the Palestinian people in adhering to their right of return as well as their right to regain their lands, villages and freedom.

4. The conferees reject all declarations, initiatives and campaigns aimed at undermining the right of return. They call upon the Palestinian leadership to hold fast to this right and not to compromise it.5. The conferees call upon Palestinian institutions and agencies working for the right of return and the Palestinian cause generally to coordinate their efforts and unify their plans to confront the challenges and dangers that threaten the right of return today.6. The conferees express their greatest pride with the steadfastness of the Palestinian people and the invaluable sacrifices they have offered particularly those who were martyred, injured and disabled in defence of their homeland, homes, sacred sites, freedom and dignity for almost one hundred years. They continued to make these sacrifices generation after generation culminating with the Aqsa Intifada, which the Palestinian people illustrated with brilliant examples of renewal, dignity and resistance in the face of daily vicious attacks against them by the Occupation Forces.

7. The conferees express their gravest concern over the growing threats to the city of Jerusalem, the nerve center and capital of Palestine. These are carried out through the ongoing efforts to Judaize the city, obliterate its Palestinian and Arab identity either through appropriation or expulsion of people or through dubious deals to purchase land. Likewise, the conferees warn of the danger of violating the blessed Masjid al Aqsa or aggression against the sacred sites and Islamic and Christian endowments in the Holy City.8. The conferees emphasize that resistance is a legitimate right of any people subjected to foreign occupation. It is, therefore, the right of the Palestinian people to resist the occupation of their homes, lands and sacred places. In this regard, it is incumbent on the international community and supporters of truth and freedom to rally to their aid.9. The conferees believe that the activation of the Palestinian Liberation Organization and strengthening of its role as an inclusive body that represents the Palestinian people is a basic demand. There is a growing need for it at this time in particular; subject to taking the necessary reform measures and democratic steps to guarantee the participation of all the Palestinian national forces.10. The conferees insist on the importance of efforts to conduct elections among Palestinians wherever they are. They emphasize in this context particularly the need to conduct elections among Palestinians in Europe, which would bring about effective representation for themselves and enable them to serve their country and their cause today and in the future.11. The conferees express gratitude to those sympathizers and supporters in Europe who defend the rights of the Palestinian people. They acknowledge the principled stand adopted by Europeans officials and members of the public to demonstrate their solidarity with the Palestinian people. They encourage them to continue their support and increase it to match the scale of aggression by the Occupation against the Palestinian people.12. The conferees salute the immense fraternal efforts by members of the Arab and Islamic communities in Europe in their support and continued solidarity with the Palestinian people. The conferees commend their principled stand alongside those who support truth, justice and freedom in Europe to condemn the crimes and violations of the Occupation.13. The Palestinians in Europe call upon the European Union, the Council of Europe and European countries at large with their parliaments, governments and public institutions to support the Palestinian people and empower them to restore their inalienable rights. The conferees urge these forces to deny aid to the Occupation. Likewise, the Palestinians in Europe encourage the freedom loving peoples of Europe to increase their effective support for justice and freedom in Palestine and continued stand against oppression and occupation. They call upon opinion makers in Europe to recognize the danger of the historical injustice meted out against the Palestinian people and the need enlist everyone to work, starting with humanitarian and moral responsibilities, to terminate this oppression.14. The Palestinians in Europe confirm that besides their principled efforts to advance the Palestinian cause they also seek to maintain peace and stability in Europe. Likewise, they emphasize that their effort to advance their just cause and defend it by legal means is a right guaranteed by local laws and international conventions.15. In conclusion, the conferees emphasize the importance of safeguarding future generations in the Palestinian diaspora and transmitting to them the cause in a manner that guarantees the preservation of its immutable principles so that they would continue to work for it.16. The conferees adopted the resolutions of the workshops conducted during the conference. These are:* Development of relations with European societies - both officially and with civil society.

* The Palestinians in Europe are an organized and functional part of the Palestinian people - politically, in the media and on the popular level.

* The Palestinians in Europe affirm the need for continued communication and commitment to the responsibility of awakening.