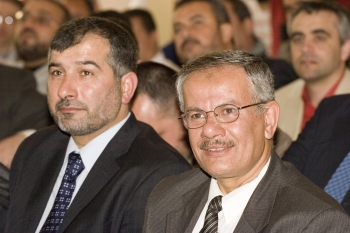 Sweden, May 6, 2006 (PRC) - The Fourth Palestinians in Europe Conference was successfully convened in the Swedish city of Malmo. It was held under the title ‘Deep rooted Identity and Firm Adherence to their Rights.'


The conference was organized by the Palestinian Return Centre, London, and hosted by the Adalah Centre in Sweden. About 5,000 guests attended the event. They included delegations from all over the European continent, representatives of Palestinian associations, institutions and organizations both from within Europe and beyond. Additionally, a number of official and public figures were in attendance; notwithstanding academicians, artists, journalists and leaders of Palestinian civic society bodies in Sweden and across the continent.

The conference was marked by a large participation of Palestinian youths from across Europe. They conducted several workshops and discussions confirming the commitment and dedication of Palestinian youth to their cause wherever they may reside. They asserted their determination to serve their cause with the most innovative ways. The conference also entailed an open discussion with members of the Swedish public and other Europeans participants. They reviewed several aspects of the Palestine Question and its evolution, confirming the growing understanding and support by significant sections of European society for the Palestinian cause.

Among those participating in the conference was the Palestinian Minister for Refugee Affairs, Dr Atif Udwan. Prime Minister Ismail Haniyeh also addressed the conference through as direct telephone link to Gaza. Similarly President Mahmud Abbas sent a written letter which was read by the Palestinian General Delegate to Sweden. The leader of the Islamic Movement in Israel Shaykh Raid Salah and the official spokesperson for the Orthodox Church in Jerusalem and the Holy Lands Archbishop Father Dr. Ata Allah Hana also addressed the conference by telephone link. This broad participation in this year's event underscored the immense importance of the Palestinian cause and the unity of its people wherever they may be.

The Fourth Conference which has followed the conferences of London (2003), Berlin (2004), Vienna (2005) was conducted in an atmosphere of positive and constructive discussions.

The conference issued its final statement which was the result of workshops in which an estimated 600 persons participated.

SECOND: the Malmo conference reaffirmed the decisions taken in London, Berlin and Vienna concerning adherence to the right of return. They warned of the dire consequences of attempts to undermine or jeopardise this right. They demanded the urgent implementation of this right in a manner that would enable the Palestinians to return to the homes from which they were forcibly expelled. The conference asserted that the refugees must be afforded due compensation as a result of all the physical and psychological losses which they and their descendents have suffered throughout the years of exile.

THIRD: the conference appreciated with pride the steadfastness and great sacrifices made by the Palestinian people including their martyrs, wounded and prisoners in defence of their dignity, country, homes and sacred sites for the better part of the last century. These sacrifices have continued uninterruptedly from one generation to the next culminating in the Aqsa Intifadah during which the Palestinians have demonstrated the most outstanding examples of awakening, dignity, and steadfastness in the face of the brutal campaigns conducted by the Occupying Power.

FOURTH: the Palestinians in Europe conference congratulate the Palestinians in the Occupied Territories for the successful manner in which they conducted the recent democratic elections which were carried out in an open and free manner. This was done in spite of all the pressures and challenges. The conference calls upon all parties to respect the results of the elections and the independent will of the Palestinian people and help them to build their free and sovereign state in their land.

FIFTH: the conference salutes the heroic Palestinians in the lands occupied in 1948 and expresses its pride in their stubborn endurance in their land and noble defence of the sacred Islamic and Christian sites. The conference expressed its absolute solidarity with them in the light of the current occupation which targets their identity and imposes on them racist and discriminatory laws.

SEVENTH: the conference drew attention to the continued annexation of land and racist designs intended by the construction of the wall which has been condemned internationally through the advisory ruling of the International Court of Justice and the UN General Assembly. The wall confines the Palestinian people to isolated enclaves, expropriates their land and leaves them in a huge prison. It denies them contact with each other and fragments their land. The conferees insisted that the European countries and all other parties must ensure the dismantlement of this racist wall which envelops the Palestinian land. The conference called for the imposition of punitive measures in response to the acts of aggression and hostility by the Occupying Power and its expansionist conduct.

EIGHTH: the conference reaffirmed the right of the Palestinian people to resist foreign occupation of their land, their homes and holy sites and to repel the constant aggression meted out against them. They should be supported in this undertaking by the international community and all those who profess commitment to truth and freedom in the world.

Palestinian Children will continue the March towards Palestine

ELEVENTH: the conference expressed its pride in the adherence of the Palestinian youth in Europe, boys and girls, to their identity and their insistence on the restoration of all their inalienable rights including the right of return. In this context the conference emphasised the need to create ample opportunities and avenues for these youth to realize their full potential and the service of their just cause by effective and innovative means, guaranteeing continued positive contact in every sphere of Palestinian endeavour.

TWELFTH: the conference expressed its profound appreciation for the positive support and solidarity demonstrated by wide cross-section of civil society in Europe toward the Palestinian people. The conference urged non governmental organizations in Europe to continue their support for the Palestinian people and their institutions and their efforts to strengthen the bonds of participation and cooperation at all levels.

THIRTEENTH: the conference expressed its utter dismay with the punitive measures which certain Europeans have decided to impose on the Palestinian people following the exercise of their democratic vote. The conference views the political and economic blockade of the Palestinian people as a regrettable backward step and an assault against universal humanitarian and moral standards. They view it also as a dereliction of duties as well as European historical obligations toward the Palestinian people, especially at this most delicate juncture. The conference urges all the concerned parties to immediately change this unjust stand which has caused immense distress among the Palestinians in Europe. They would have negative consequences on efforts to build confidence and boost the image of Europe and the positive role it is expected to play as a balancing force in international relations.

FOURTEENTH: the Palestinian in Europe conference expressed its confidence that the scandalous sanctions imposed on the Palestinian government would soon be lifted. They note that there is mounting frustration in certain official circles as well as on the popular level across Europe with these sanctions which contradict all moral and humanitarian standards. In this regard the conference viewed the stand of the Swedish government not to succumb to external pressure as a clear sign that these measures would ultimately become irrelevant. They note that the pettiness of these measures which do not in any way reflect the conduct of civilized nations.

FIFTEENTH: the conference calls upon civil society bodies in Europe to increase their demands for the lifting of the sanctions and blockade against the Palestinian people. They urged the European governments to stand alongside the Palestinian people and assist them in their struggle to regain their usurped rights including the right of return and the establishment of their state with Jerusalem as its capital.

SIXTEENTH: the conference salutes the fraternal support of the Arab and Islamic communities in Europe and their continuous support for Palestine and its besieged people. This is demonstrated across Europe in the ongoing solidarity campaigns initiated in response to the policies of blockade and starvation. The conference appreciates the support of the Arab and Islamic communities for the Palestinian people and their condemnation of the crimes and violations committed by the Occupying Power. It appreciates their solidarity and stand side by side with others in support of truth, justice and freedom and those who oppose oppression in Europe.

SEVENTEENTH: the conference reaffirms the adherence of the Palestinians in Europe to their Palestinian national identity. It asserts their constructive role in the building of their respective European societies and the promotion of cultural interaction to secure their progress and prosperity. They reaffirmed their commitment to serve the peace, stability and the general good of the European society.

EIGHTEENTH: the conference urges all educational, academic cultural and media institutions in Europe to inform the European public about the truth of the Palestine Question, its dimensions and consequences. This includes the historic injustice inflicted on the Palestinian people and the usurpation of their ancestral land, homes and inalienable rights. The conference stressed to address every aspect of prejudice or exclusion that may be found in educational programmes, school-books, cultural and media materials.

NINETEENTH: the conference reaffirmed the importance of enacting the decisions taken at the previous conferences in London (2003) Berlin (2004) and Vienna (2005) with their special recommendations to afford greater opportunities to the Palestinian youth and discussion of the Palestinian issue in European languages. They urged the forging stronger relationships with politicians and influential figures in European society concerning the rights and aspirations of the Palestinian people. They emphasised the need to provide ample introductory and promotional material that inform and clarify the facts surrounding the Palestine Question and the right of return and reinforce the Palestinian identity within the widest possible sectors of the European public.