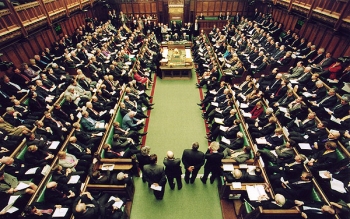 Senior parliamentarians from the Labour and Liberal Democratic parties yesterday called for immediate international protection for Palestinian refugees in the Occupied West Bank and Gaza Strip. The parliamentarians were speaking at a public seminar organized by the Palestinian Return Centre (London) to mark the 22 anniversary of the massacre of Sabra and Shatila in the House of Commons on the subject of ‘Protection for the Palestinian Refugees in the West Bank and Gaza Strip'.

A large gathering filled the Jubilee Hall to capacity for the occasion. Apart from the representation from the media and academia there were also a number of senior diplomats and ambassadors in attendance. They included the League of Arab States Ambassador to the UK, Dr. Ali Muhsin Hamid as well as diplomats from the German, South African and Lebanese embassies.

In his presentation Neil Gerard spoke on the work of the Joint Parliamentary Middle East Councils and in particular their Commission of Enquiry carried out in 2000. The Commission had visited in late 2000 the refugee camps in the West Bank and Gaza, Jordan, Lebanon and Syria and conducted extensive interviews with residents not only about their living conditions but also their views on the future. Gerrard said they found universal adherence to the right of return. He read to the audience excerpts from the report to confirm this.

Gerrard said the right of return is an individual one and that no negotiator had either the mandate or right to sign it away. He added the Commission's report has since been translated into Arabic and sent back to the camps to confirm to the refugees that the Commission had indeed recorded and conveyed their demand to exercise their right of return.

On another level the Labour parliamentarian said that the Joint Parliamentary Middle East Councils had established contacts with fellow parliamentarians in Germany, Holland and France.

Liberal Democrat spokesman Tom Brake in his speech focussed on the theme of the right of return. He emphasised the need for all parties to respect and comply with UN resolutions including Resolution 194. Without ruling out the return of the refugees to their homes Brake said his party favoured a negotiated settlement of the matter.

Dr. Abdullah began his presentation by recalling recent events in the Occupied Territories, particularly the arbitrary and deliberate obstruction of UNRWA officials from carrying out their international duties. He cited the recent case of High Commissioner Peter Hansen being barred from entering the West Bank, the shooting of Palestinian children in several UNRWA schools both in the West Bank and Gaza, the Israeli military commandeering of their schools and turning them into interrogation and detention centres.

On the issue of protection, Abdullah said it involves two functions: (1) the provision for the day-to-day needs of the refugees and (2) the attainment of a durable and just solution to the refugee problem. He referred the audience to a recent document prepared by the UN Special Rapporteur on Human Rights in the Occupied Territories, Prof John Dugard. The latter who is himself a South African wrote in his latest report that Israel was operating "an apartheid regime" in the territories "worse than the one that existed in South Africa".

Sabah al Mukhtar began his speech declaring there was no justice in the world today. The denial of seven million millions their right to live in their ancestral land is an act of great injustice and shame on the ‘civilized world'. He said the time had come to expose and shame into silence those who pay lip service to the virtues of international law and human rights. On the issue of regional protection, al Mukhtar said there was a need for regional powers and Egypt in particular to act more as a defender of Palestinian rights and less as an intermediary between Israel and the Palestinian.

Siraj Sait, like Sabah al Muktah attributed the absence of refugee protection to the abuse and politicization of the law. He decried the manner in which the 1951 Refugee Convention had disregarded the right of the Palestinian refugees to protection and the failure of the UNCCP to fulfil its mandate under the terms layed down in Resolution 194. The current abuses in the Occupied Territories demonstrate that international law was truly on trial.

During the question and answers session several references were made to the issue of international sanctions against Israel. Some of the speakers pointed out that UN Human Rights Commission had as early as 1984 made several requests to the UN General Assembly, through the Economic and Social Council, to recommend to the UN Security Council the adoption against Israel of the measures referred to in Chapter VII of the Charter of the United Nations, including sanctions and international armed intervention to end Israel's threat to peace and acts of aggression (CHR Res. No. 1984/1 A/B; 20 February 1984).

Among the questions raised from the floor was that pertaining to a recent article written by Menzies Campbell the Liberal Democratic shadow foreign secretary in which he called for sanctions against Israel because of its human rights record which breached the Articles of Association with the European Union. When asked to comment on the matter further Tom Brake said that he had supported the views expressed by his colleague and that the party was currently engaged in discussions on the matter.

By way of summing up and appraisal, chair of the seminar Neil Gerrard pointed out that when he entered parliament 12 years ago a large number of parliamentarians were prepared to give automatic and unconditional support to Israel. He said this is no longer the case. He called upon civil society bodies and NGOs to intensify their efforts and capitalize on the changes that were taking place not only in the parliament but also in public. He urged the audience to make good use of the media even though it was a very difficult task to break through its barriers.