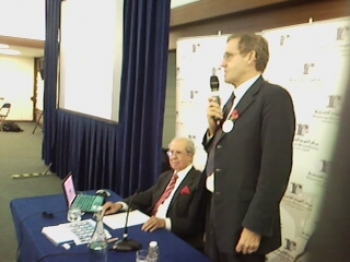 The Palestinian Return Centre (PRC) held a seminar yesterday, Friday 12th November, in central London to release a comprehensive Atlas of Palestine from 1917-1966. This is a vital piece of work documenting history, landscape and Geography of Palestine that has been erased by Israel. The eagerly anticipated event was widely attended bringing together journalists, academics and activists Friday.


The meeting was titled “Mapping Palestine: for its survival or destruction” Using Documents to Prove Rights and to Correct Wrongs, Professor Salaman Abu Sita, an eminent scholar, redrew the contours of Palestinian landscape using official  documents, to vividly demonstrate the erasure of Palestinian history and the ongoing Nakba.

His presentation provided a historical and forensic analysis of the mechanism of expulsion, which began in 1947 and continues even today. He provided graphic illustrations of the policy of expulsion. The Atlas contains names and descriptions of Palestinians villages that have been demolished. It also provides names, description and location of villages which Israel chooses not to recognize.

This Atlas is the life long struggle of Abu Sita, it took him approximately 20 years to prepare this it. He used German, French, British and Turkish archives to collect thousands of maps and documents.

A number of MPs, activists, journalists and researchers attended the meeting. Ex-labor MP and director of “Labour Friends of Palestine”, Martin Linton chaired the meeting.

Andy Slaughter – Labour MP for Hammersmith, and chair of “Labour Friends of Palestine” participated in the evening as well.

According to PRC General Director, Majed Al zeer, the atlas is a key contribution in the struggle of the Palestinian people. He believes that the Atlas fills a gap in the historic narrative as it provides documented history which Israel has been trying desperately to erase.

“I think there is a lack of true, historic and documented evidence of Palestine that Israel tried to erase particularly in the West. The Israeli narrative for many years has been mainstream even though it’s faced severe knocks. This Atlas now provides the shattering blow. The atlas simply debunks many myths including the idea that Palestine was empty.” Said al zeer

PRC has worked tirelessly in supporting the right of return since 1996. PRC is planning a week of actions in the United Kingdom and Europe to commemorate the 2nd Palestinian Memorial week titled, “Ongoing Nakba” between 15th to 22nd of January 2011. It will begin with a conference on the 15th here in London.
Short Link : http://bit.ly/2Cbp4yD
Tags
Next Article
Palestine Memorial Week to be held across UK “Ongoing Nakba”
Previous Article
Palestinian Refugees: Monthly Memo News
Most Views
Related Posts