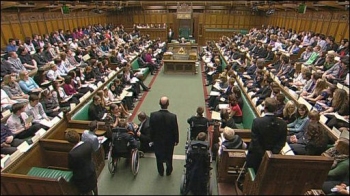 Palestinian Return Centre (PRC) expresses its concerns over the intended amendment on commons vote this Monday on Universal Jurisdiction.


PRC points out that if the Police Reform Bill is passed on Monday, will make it increasingly difficult to obtain an arrest warrant for anyone accused of war crimes and crimes against humanity. The new changes have been introduced due to political reasons and not moral and legal considerations. The intention to change laws for the arrest of war criminals so that the Director of Public Prosecutions, a political position, has a veto on whether an arrest warrant can be issued against a suspected war criminal would endanger arrests from going ahead as it would introduce delay and allow political interference. Civic organisations across the UK are united in their protestations. We urge you to remember the history of Universal Jurisdiction and remind you that it is a totemic symbol of progress and justice for every human being. The very concept champions human rights over political interests. The success of universal human rights should not now be compromised and chipped away merely for the political interest of a single state. The Palestinian Return Centre and other NGO's are calling for all MPs to vote against these proposed changes. The current law complies fully with the Geneva Convention and any regressive change voted for by British MPs will send the wrong message about Britain’s seriousness in upholding truth and justice.In a letter to the British MPs, PRC wrote, “We remind all MPs that Britain has a duty to seek out and prosecute those responsible for war crimes. We are also reminding you of the concessions you are asked to make in this vote. Your vote on this issue is calling you to alter a legal position that is informed by our highest ideals. Universal laws are there to inform and steer our politics and every MP must think twice when reversing this relationship.” PRC hopes that Britiain would adhere to its laws and regulations and make it difficult for those war criminals. PRC reckons, that allowing those war criminals to move freely from and to Israel, will only encourage Israeli apartheid practices against the Palestinians.
Short Link : http://bit.ly/2A5d0gW
Tags
Next Article
Palestine Memorial Week to be held across UK “Ongoing Nakhba”
Previous Article
Event: Remembering Israel’s war on Gaza
Most Views
Related Posts