Palestine Memorial Week to be held across UK “Ongoing Nakhba” 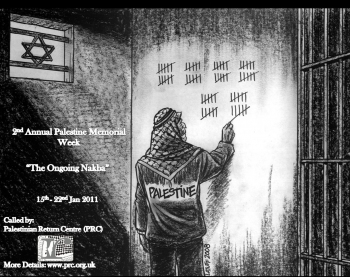 The Palestinian Return Centre (PRC) continues its preparations for the second Palestine Memorial week in the United Kingdom and Europe. The annual event will be held from the 15th to the 22nd January 2011. The event commemorates the memory of Palestinian victims of the Nakhba since 1948 until now. It also coincides with the 3rd anniversary of the onslaught in Gaza 2009.


PRC key event, “The Ongoing Nakhba Conference”, which will highlight on the latest developments passing the Palestinian cause. The conference will look at the Nakhba as a real and contemporary issue and not an event consigned to Middle East history.