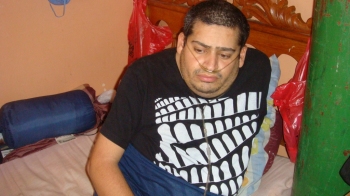 Palestinian Return Centre (PRC), visited families of Palestinian refugees in Brazil, to investigate the appalling conditions under which they live. PRC discovered many are experiencing conditions far worse than the one they fled.


PRC delegation met a number of families all having similar stories about the lack, and sometimes the total absence, of services. As a consequence some go hungry and families with chronically ill members have no access to health care. The situation has lead some families to despair and anger at the international system that has failed them.

The delegation also met with lawyers and human rights activists and urged them to continue their work in support of Palestinian refugeesPalestinian refugees in Brazil fled the war in Iraq, where they were targeted for violence, to Ruwaishd and Walid camps in Jordan, from where they were temporarily resettled in Brazil. They were brought to Brazil through United Nations High Commissioner for Refugees (UNHCR) program, to alleviate their suffering and provide some basic health and social service. Upon their arrival to Brazil, instead of finding a more hospitable situation they faced tortuous conditions.

All the promises given to them appeared to be untrue.  Promises of minimal, health care, education, security and work were untrue.  They protested before the Palestinian embassy in Brazil. They appealed to Brazilian authorities to either give them shelter and assistance or send them back to Palestine or any country that is able to provide basic humanitarian services. Tragedy of Refugee Luay Sameer Oda:During the visit PRC delegate met with Luay Oda family.. Luay’s health situation started to dramatically deteriorate upon his arrival to Brazil. He was not able to breathe except with the help of a special breathing apparatus that is connected to him at all time.

PRC spoke to Luay at great length to determine the level of service he is receiving from the authorities.

Luay spoke in great detail about his extreme health condition saying, “I have lived most of my life in Iraq and spent a few years in the stormy desert. Our tents were damaged many times. I never required the use of external oxygen support despite these conditions. But after arriving in Brazil, my health deteriorated and turned worse. Doctors told me that if I don’t undergo a surgery in my lungs, then within 3 years my lungs will cease to function. At the moment, I’m alive with only half a lung and with the help of this medical oxygen machine.  Sadly, UNCHR and Brazilian officials denied me basic medications. They don’t want to provide me with the required health care. Simply, they are killing me!”Palestinian Return Centre (PRC) urgently appeal to UNCHR to investigate Luay’s conditions, which is indicative of the difficulties that many others are facing.

PRC General Director, Majed Al zeer, stated that PRC will continue its efforts to assist Palestinian Refugees in general, especially those facing extreme humanitarian conditionsAl zeer said in a statement that his centre will pay great attention to the tragedy of Palestinian refugees from Iraq and try to alleviate their suffering. Al zeer also said that his organization coordinated a number of European parliamentary delegations to the refugee camps to raise their plight and encourage European governments to pay greater attention. PRC is also carrying out a number of documentaries showing the desperate conditions faced by Palestinian refugees from Iraq which will be shown on mainstream media very soon.

PRC is an independent consultancy focusing on the historical, political and legal aspects of the Palestinian Refugees. The organisation offers expert advice to various actors and agencies, national and international, on the question of Palestinian Refugees within the context of the Nakhba - The catastrophe following the forced displacement of Palestinians in 1948 - and serves as an information repository on other related aspects of the Palestine question and the Arab-Israeli conflict. It specialises in the research, analysis, and monitor of issues pertaining to the dispersed Palestinians and their internationally recognised legal right to return.