Witnesses/Stories to be heard on 2nd Palestine Memorial Week 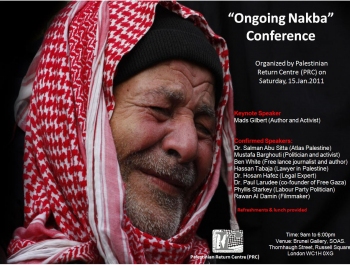 The 2nd Palestine Memorial Week in the UK and Europe will take place as planned from 15th to 22nd Jan 2011. A number of events will take place during the week. Events will be held in various cities with galleries, workshops and film screening taking place in universities and public places. So far, more than 26 cities and universities will participate in the event.


The key event within the Memorial Week will be an International conference entitled the “The Ongoing Nakba” Speakers in the event will include Phyllis Starkes, Labour Party Politician and Former MP and Mads Gilbert, a Norwegian doctor who was in Gaza during Operation Cast Lead. Dr. Salman Abu Sitta, Author of Atlas of Palestine and prominent Palestinian historian. From the Occupied territories, Mustafa Barghouti, Politician and activist.

Speakers will tour cities in the UK speaking about their experience.

Norwegian Doctor, Mads Gilbert who served as a doctor during numerous periods in the Palestinian territories and Lebanon will be the key note speaker. Gilbert worked at al-Shifa Hospital during the

His experience during Gaza onslaught has been transformative. The level of brutality he saw was the energy behind his tremendous activism and his recent book. As many international media outlets were not able to report from Gaza, Gilbert maintained frequent contact with Norwegian media, as well as segments of the world press, including CNN, BBC, ABC and Al Jazeera.

A renowned Palestinian scholar will speak at our conference, author of the Palestinian Atlas, Dr. Salman Abu sita. He released his recent 2010 Edition of The Atlas of Palestine 1917-1966. The Atlas is an outcome of more than 20 years of extensive research and academic work.

It is an extended and edited edition of the "Atlas of Palestine 1948", published in 2004. In the Atlas, Abu Sita debunks the allegations that Palestine was an empty land.

Memorial week activities will include Exhibitions prepared by PRC that covers a variety of issues like the Apartheid Wall, Palestinian detainees, Gaza War and the Palestinian Nakba 48. A film screening will take place at participating cities titled “Al Nakba” directed and prepared by film director and our speaker Rawan al Damin, produced by Al jazeera Satellite TV.

Other speakers will include Ben White a freelance journalist specializing in Palestine/Israel who has written for Comment is Free, the New Statesman, Electronic Intifada and guardian will speak about the Israeli apartheid practices against its own citizens. Dr Hosam Hafez, Head of Political Section Embassy of the Syrian Arab Republic, Dr Paul Larudee, cofounder of the Free Gaza Movement and international human rights activist and Ibrahim Heiwth, Interpal Chairman will speak in the event. Renowned Palestinian professor, Ghada Karmi, will participate and chair one of events sessions. Other speakers will include PRC Genral Director,Majed Al Zeer, Andy Slaughter MP, John McHugo of the Lib Dem and Palestinian ambassador, Manuel Hassassin.

PRC is an independent consultancy focusing on the historical, political and legal aspects of the Palestinian Refugees. The organisation offers expert advice to various actors and agencies on the question of Palestinian Refugees within the context of the Nakhba- The catastrophe following the forced displacement of Palestinians in 1948 - and serves as an information repository on other related aspects of the Palestine question and the Arab-Israeli conflict. It specialises in the research, analysis, and monitor of issues pertaining to the dispersed Palestinians and their internationally recognised legal right to return.