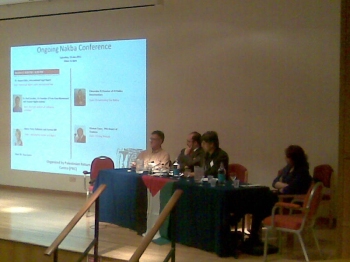 PRC hosted a diverse range of distinguished speakers at their annual conference in London. The conference marked the launch of the second annual Palestine Memorial Week. The conference was opened by Majed al Zeer, General Director of PRC and Palestinian ambassador to the UK, Dr Manuel Hassassin.

Speakers discussed political, historical, philosophical and humanitarian aspects of the Nakba and the continuing occupation of Palestinian land. All speakers concurred that the Nakba (catastrophe) of 1948 and the ethnic cleansing and dispossession it brought is an ongoing event.

Dr Ghada Karmi, herself a victim of the original expulsion stated: “The Nakba is not an historic event; it goes on every day and should not be viewed as a part of a painful past that we need to overcome.”

Dr Salman Abu Sitta gave a ground-breaking presentation exposing the systematic expulsion of Palestinians in 1948 and revealing the ample space in what is now Israel that can incorporate all the Palestinian refugees and the rebuilding of their destroyed villages. He urged young British people to follow in the footsteps of their parents and grandparents who opposed the Nazis and Fascists in Europe in the 1930s and 40s and oppose the Nakba.

Dr Mads Gilbert, an eyewitness of modern Israeli attacks explained that not only is the Nakba ongoing, it is worsening. Speaking about the Israeli bombardment of Beirut in 1982, Dr Gilbert said: “I though that was going to be the worst experience of my life, but then I saw what happened in Gaza during the invasion of 2008-9”.

PRC is a UK-based NGO raising awareness of the plight of Palestinian refugees – the largest refugee population in the world.