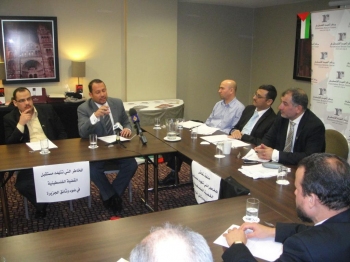 Palestinian Return Centre (PRC) expressed its deep anger over the documents disclosed by Aljazeera channel regarding the Palestinian cause, especially refugee issue. PRC perceives critically the leaked documents considering them as dangerous and fatal stances.

Disclosed positions of PA adopted alternative solutions for right of return like compensation, re-settlement out of Palestine and allowing around 100.000 refugees only to return to Palestine in 10 years time.  The number represents very limited group of Palestinian refugees whose number exceeds 8 million refugees.

PRC believes that Palestinian right of return is individual, common and sacred that can’t be relinquished. The centre points out those Palestinian refugees should return to their villages where they were ethnically cleansed from in addition to compensating them.

As part of practical response to the documents, PRC, held a workshop in London on Tuesday, January 25th, 2011. Reputable Palestinian writers, politicians, academics and journalists discussed the urgent matter and expressed great anxiety.

The centre stressed on the fact that the United Nation resolutions guarantee the right of Palestinian refugees to return plus obtaining compensation.

The emergency workshop discussed PA attempts to terminate right of return. Participants stressed on a number of facts that Palestinian right is solid, common and individual and can’t be given up.

They considered the revealed documents as the peak of Palestinian negotiating team concession. They added that that team is trying, “to relinquish our basic right of return. They started in Oslo passing by Genève document and other agreements.”