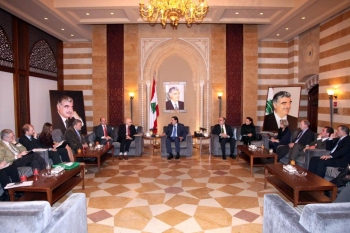 During the two day visit the delegation paid visit to Palestinian refugees in Burj Al Barajna, Nahar al Bared and Shatila camps. Palestinian refugees in Lebanon face some of the most difficult challenges of all refugees and this was a good opportunity to see firsthand conditions in the camps and the level of support that is required for restoration work and to meet basic living conditions.

Such delegations are crucial and it’s notable that the PRC carries out such high profile delegations to raise the issues facing refugees at the highest levels.