Report on PRC’s Delegation to Lebanon 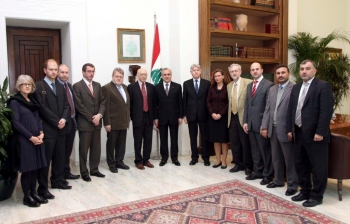 During the two day trip the delegation paid visits to Palestinian refugees in Burj Al Barajna, Nahar al Bared and Shatila camps. Palestinian refugees in Lebanon face some of the most difficult challenges of all refugees and this was a good opportunity to see firsthand conditions in the camps and the level of support that is required for restoration work and to meet basic living requirements. They also met with head of UNRWA’s middle Beirut branch, Muhamad Khalid and vice president of Al Ghabiri municipality in Shatila camp. The delegation members also visited  Shatila camps which was the scene of bloody massacre in 1982. Sir Gerald Kaufman MP expressed deep sorrow for the terrible conditions facing the refugees. He said, “I’m a shamed to see these horrible scenes”. The delegation also met with Thabit, an organization which campaigns towards implementing the right of return for Palestinians.