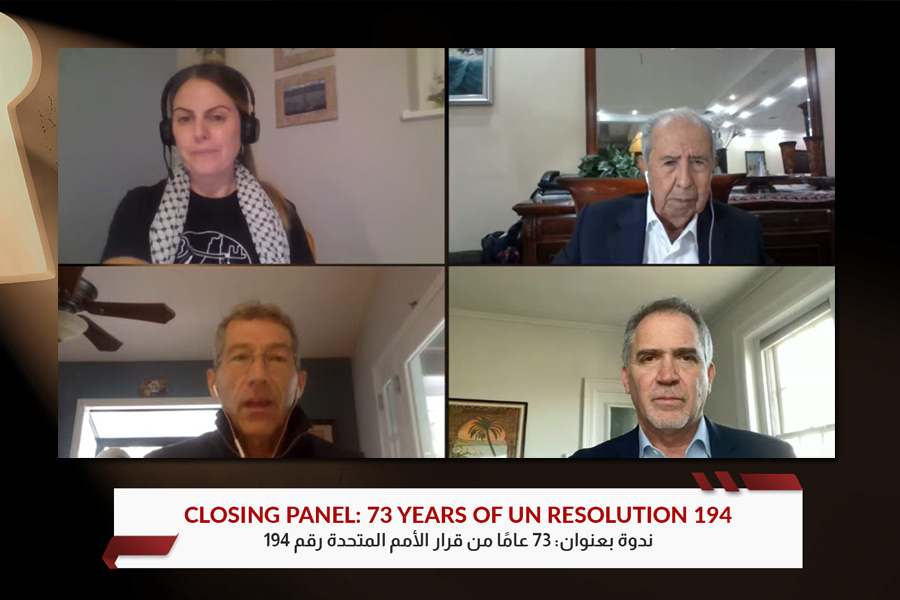 PRC held on Friday the final webinar of ‘Return Week II’ to discuss the legal and political implications of the Palestinian refugees’ plight and the right of return.

Entitled “73 Years of UN Resolution 194”, the online panel was chaired by Michaela Rafferty, a dedicated activist for Palestinian rights based in Ireland.

The first speaker was Miko Peled, a writer and human rights activist born and raised in Jerusalem. He is considered by many to be one of the clearest voices calling for justice in Palestine, support of the Palestinian call for Boycott, Divestment and Sanctions, (BDS) and the creation of a single democracy with equal rights on all of historic Palestine.

Peled stressed the importance of commemorating UN Resolution 194 and reminding the world that “the right of return shall not, could not, and must not ever be negotiated under any circumstances”.

“I think the right of the Palestinians to return should be implemented unconditionally as quickly as possible”, Peled insisted.

The activist said the silence maintained over the right of return in Western countries is a sign compliance of governments of the Western world, particularly the United States of America, with the Zionist movement.

He recommended reading books about Palestine, namely Salman Abu Sitta’s Atlas and another book entitled “Palestine: A Four Thousand Year History” by Professor Nur Masalha. These books help readers understand the depth of resolution 194 and how strong the case for refugees to return is.

Peled said that in Washington, where he lives, “there’s no Palestinian presence” as organizations and diplomats fear bringing up the issue for fear of losing funding or losing access to Congress. “If nobody raises the issue, if nobody demand that resolution 194 be implemented, then this right will be marginalized”, he warned. Peled said that as people of conscience, as people who believe in justice “we need to mobilise to bring Palestinian right of return back to the political and human rights discourse”.

He concluded by wondering: “Why these people who yearn so much for return, are not allowed to return?”

The second speaker was Dr. Salman Abu Sitta, who was born in 1937 in the Beersheba district of Mandate Palestine. He is an engineer by profession and a researcher most known for his ground-breaking project mapping of Palestine in 21st, 20th and 19th centuries and developing a practical plan for implementing the Palestinian right of return of Palestinian refugees. Dr. Abu Sitta said he just came back from Gaza Strip after 50 years of absence and that is where 2 million Palestinians are seeking refuge from the Zionist invasion of Palestine since 1948. Before 1948, they lived in Palestine, before they were attacked by Haganah in 1948.

Abu Sitta said Israeli massacres continue to prevail till today, 73 years later and materialize in the Gaza Strip, “the biggest, longest-serving concentration camp in the world which is besieged by land, sea, and air”.

“During my visit, I frequently woke up at the crack of dawn at the ham of drones above my head”, said Abu Sitta, adding that Israeli soldiers order Palestinians “to leave your house in 10 minutes or we’ll kill you, and they did; They pick up any building and they blow it up, Why is that? Why did those settlers from East Europe come and attack us so ferociously, so constantly for so long while the so-called civilized world is watching?”, he asked.

“People from Gaza can return by walking for a few meters; they can see their homes from the barbed wire”, he added. “The right of return is sacred, legal, possible, and inevitable; sacred because it is in the heart and the mind of every Palestinian; It is legal in every line of international law and principles of justice.”

“The right of return will come; justice will prevail”, despite the Western colonial structure, headed by the US, Britain, Germany and all the rest of Europe, which supports Israel at the expense of Palestinian blood, confirmed Abu Sitta.

The final speaker, Terry Rempel, a Canadian-based independent scholar currently residing on Treaty 6 Territory, a traditional gathering place for diverse Indigenous peoples. A graduate of the University of Exeter, Rempel holds a doctorate in philosophy with a specialization in Middle East politics and was a founding member of BADIL Resource Center for Palestinian Residency and Refugee Rights in Palestine.

Rempel defined Resolution 194, which was adopted by the United Nations General Assembly, resolving that “refugees wishing to return to their homes and live at peace with their neighbours should be permitted to do so at the earliest practicable date, and that compensation should be paid for the property of those choosing not to return and for loss of or damage to property which, under principles of international law or equity, should be made good by the Governments or authorities responsible.”

Expanding on Resolution 194, Rempel referred to the legal gaps between the principle and practice when it comes to right of return.

Rempel discussed the manipulation of Resolution 194 by a number of Western governments in an attempt to deny Palestinian refugees their inalienable right of return.

The right of return refers to the right of Palestinian refugees to return to their homeland from which they have been expelled since 1948. It implies both first-generation refugees and their descendants, regardless of their place of birth or residence and their political, social, and economic condition. Israel has never cease to undermine such an inalienable right for Palestinians inside and outside occupied Palestine.

'Return Week', in its second edition this year, is held annually by the PRC to raise awareness amongst the international community about the inalienable right of Palestinian refugees to return to their homeland. Every year, a plethora of activists, academics, and political commentators take part in webinars/seminars organised by PRC as part of the 'Return Week' in an attempt to underscore the Palestinian refugee plight and discuss pro-Palestine outreach policy and advocacy mechanisms seeking to enable Palestinian refugees to exercise their right of return through international laws and conventions.

This year’s event is special in form and content. It gives a great deal of attention to artistic visualizations of the inalienable Palestinian right of return. As well as the webinars that were held as part of Return Week, a ten-day art exhibition was launched on December 2nd at P21 Gallery in London and wrapped up on December 12. 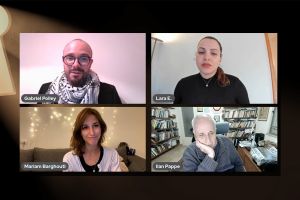